Scott McLaughlin won a shortened final race of the opening Supercars All Stars Eseries round at Monza, profiting from the race being called off early while marginal on fuel.

Early dramas and a subsequent safety car meant the race was one lap shorter than planned, allowing reigning Supercars champion McLaughlin to cross the line with just a litre of fuel in the tank - which wouldn't have been enough to complete the original race distance.

McLaughlin had previously taken victory in the opening race of the new Eseries competition - created by Supercars to fill the void without motorsport due to the coronavirus pandemic - at Philip Island, with Jack Le Broq winning the reversed grid race.

The race - which was live streamed on Motorsport.tv - got off to spectacular start with two big pile-ups on the opening lap.

The first involved Zane Goddard nudging Anton De Pasquale into Chaz Mostert at the first chicane, before further contact on the run to the second chicane left Bryce Fullwood flying through the air and Shane van Gisbergen - who won a Blancpain Endurance Cup race at Monza in 2016 - upside down.

That led to driving standards advisor Craig Baird calling for a Safety Car, but not before Cam Waters played a strategic blinder.

Having been delayed in the first lap melee, the Tickford Ford driver managed to pit before the SC was formally called and thereby satisfied his mandatory stop requirement.

With early leader McLaughlin pitting later in the Safety Car phase, Waters was clear to lead the way once the race went green again. 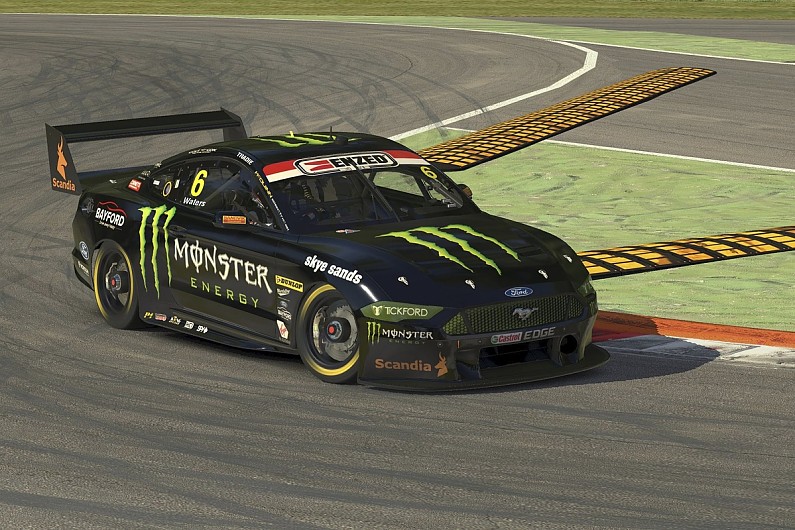 DJR Team Penske driver McLaughlin however had to pace to carve his way back through the field and breezed past Waters to reclaim the lead on lap 15.

The aggressive driving did come at a fuel penalty for McLaughlin, but he stretched it to head home Waters and the recovering Mostert, the top Holden driver.

"It was pretty tight there, because we just didn't know how many laps until the end," said McLaughlin.

"We had to take the pitstop, and we were able to get away with it.

"I think just trying to get the lead early, and get out of the crap in the Esses, was ideal.

"I had so much fun today, and I think that's the main thing. I hope everyone at home enjoyed it, because I think it's going to be cool."

Waters' team-mates Will Davison and Jack Le Brocq were fourth and fifth, followed by Andre Heimgartner and Fabian Coulthard.

Adding more value to McLaughlin's win was that his expected title rivals De Pasquale and van Gisbergen struggled in the Round 1 finale.

Erebus driver De Pasquale was fired into the wall on the run to Ascari by Chris Pither while on his way through the field after his stop.

Pither was hit with a drive-through penalty, while De Pasquale was classified 23rd, one place ahead of 2016 series champion Van Gisbergen.

As a result, McLaughlin holds a healthy series lead, with an early 44-point buffer over Waters and Mostert.