Feature race winner Nyck de Vries got a fantastic start, launching past his wheelspinning rivals to take third from eighth on the partially-reversed grid.

But after that, Prema driver de Vries made no further progress and could only watch as Latifi disappeared into the distance for DAMS' fourth win of the season.

De Vries then began to fall back, and with two laps of the 18 remaining, his tyres were destroyed.

Norris honed in and, on the last lap, took second on the Kemmel Straight with the assistance of DRS.

But Norris defended brilliantly and held off Albon for second in a tense half-a-lap, as de Vries beat the closing Artem Markelov to the line for fourth. 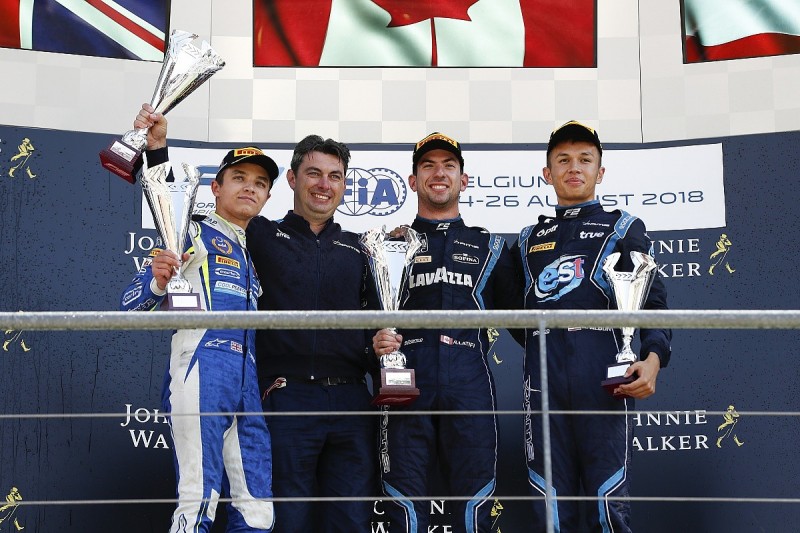 Norris had been the prime early mover. He passed Markelov at the start but immediately lost the spot at the end of the Kemmel Straight on lap one.

Norris had another go at Markelov on lap four, with the two side by side for three corners, before Markelov eased back away at the exit of Malmedy.

But Norris's move was completed a lap later and he took Luca Ghiotto two laps after that to set up a podium spot, made all the more valuable by points leader George Russell's inability to move forwards.

Having lost and then retaken seventh from Roy Nissany in the opening laps, Mercedes junior Russell was unable to move forward.

He'd already struggled with set-up the day before and finished behind Ghiotto in seventh on Sunday.

Sergio Sette Camara really struggled on the medium tyres, after taking second in the previous day's feature race. He lost eighth late-on to a charging Arjun Maini who took the final point, with Russell's ART team-mate Jack Aitken rounding out the top 10 behind Sette Camara.