In front of thousands of Dutch fans lining the Belgian track, De Vries only surrendered the lead during the pitstop phase, and despite a late safety car period following Nirei Fukuzumi's Arden-run car catching fire on lap 15 of 25, his win never looked in doubt.

Sette Camara passed Russell - who had heavy wheelspin at the start - for second at Turn 1, but he then could not live with de Vries's pace in the first stint, as the Dutchman extended his early lead to over seven seconds.

But Russell and Norris stopped earlier than Sette Camara and de Vries and both closed in, although the top two in the race subsequently proved to be more than a match for the two championship leaders.

When the green flag ended the safety car period on lap 19, and despite a late call from Prema Racing to de Vries for a late increase in speed, he looked comfortable ahead of Sette Camara and scored victory by 3.1-seconds.

The key to Norris's race was his robust defence of fourth, which he did brilliantly after moving into that spot on lap one.

But it was not without risk as he went into Les Combes three-wide with Luca Ghiotto and Alexander Albon on the opening tour. Norris kept the inside and that allowed him to consolidate the position.

Norris got alongside Russell following the safety car restart on the run to Les Combes, but Russell defended well and checked out as a resurgent Albon came back at Norris.

Albon had been as low as 14th but the safety car worked in his favour and his car came alive in the closing laps.

On the final tour, he dive-bombed Norris at Les Combes but went off and his chance was gone.

He had to settle for fifth. Russell's third place means he extends his championship lead to 15 points over Norris, while de Vries closes in on Albon in the standings. 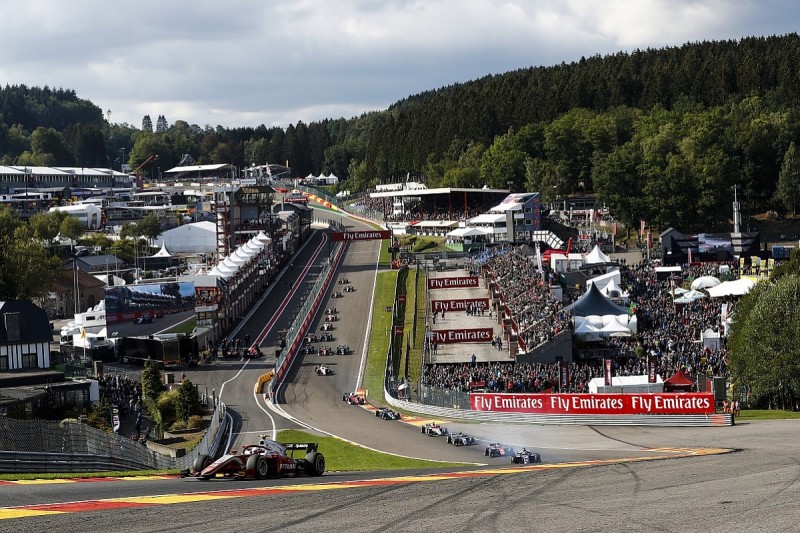 Albon is 20 points behind Norris, with de Vries, who also took two points for the fastest lap, six further back and 45 behind Russell.

Luca Ghiotto produced some brilliant defensive driving, but could not hold off a charging Artem Markelov, who beat the Campos Racing driver for sixth at the line by less than a tenth.

Markelov fell back early-on, running the alternative strategy of medium-soft, and had tried to move past Ghiotto without reward over the final four laps.

Nicholas Latifi ran the same strategy as Markelov, and took eighth, ahead of Arden's Maxi Gunther and Roy Nissany, with the Israeli driver scoring his first point of the season.

The two Charouz's rounded out the finishers with Fuoco ahead of Deletraz. The latter complained of handling issues and fell back from an initial berth in the top 10.