Luca Ghiotto was always likely to be a threat for victory as he began the race on the alternate strategy - unusual for someone starting as high as third - meaning he would start on medium tyres and switch to super softs for the final stages.

Ghiotto ran until the end of lap 24 out of 28 on the mediums, but his ability to keep the tyre alive was incredible as he led the majority of the race and consistently lapped as quickly as those on fresher tyres.

But when Ghiotto rejoined after changing tyres he was 6.3 seconds adrift of leader de Vries and, although he initially moved forward, he could not catch the race leader.

The win guarantees polesitter de Vries the title a round early, and means ART has run a driver to the title for a second year in a row following Williams Formula 1 driver George Russell's 2018 crown.

The key for the Dutchman was to hold title rival and DAMS ace Nicholas Latifi - who started second - at bay, and then remain ahead at the pitstops. His rapid laps throughout the race also meant Ghiotto could not save his tyres as much as he would have liked.

Williams F1 reserve Latifi needed to win to have any chance of taking a chunk out of de Vries's huge lead, but did take second in the race as a consolation.

In the end, Ghiotto not only failed to pass Latifi but was also repassed by Carlin's Louis Deletraz, who sealed the final podium position with a brave move at Turn 13 on the final lap.

Deletraz's third place was set up by a brilliant stint on the medium tyres, having had a lacklustre start on the super softs. Third in the championship Ghiotto at least held off his rival in the points, Sergio Sette Camara of DAMS, who was rapid in the closing stages.

Honda junior Nobuharu Matsushita claimed sixth in the second Carlin-run car, ahead of Campos Racing's Jack Aitken and Russian driver Nikita Mazepin, who takes pole for the reversed-grid race on Sunday at his home event. 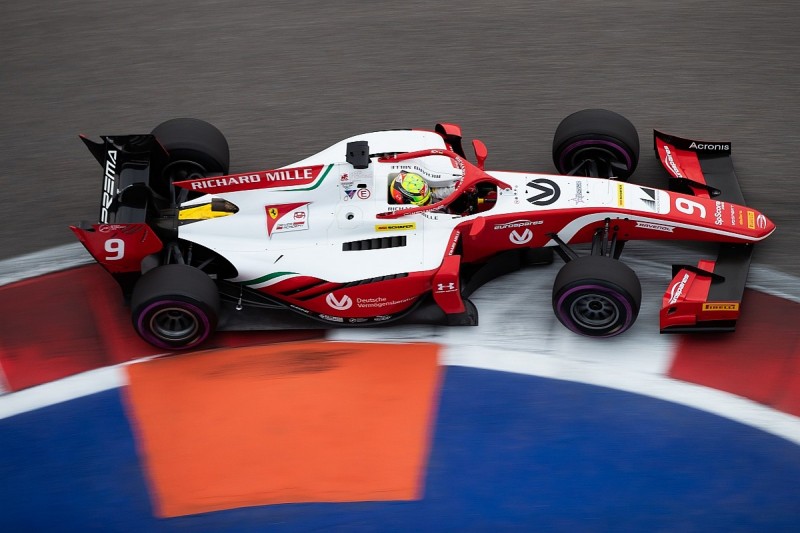 Another Ferrari junior, Mick Schumacher, had run behind Matsushita having also started on the medium tyre, until his car started to smoke and drop oil with 11 laps to go. He retired a few laps later.

Artem Markelov was the first retirement, pulling to a stop in the final sector on his first start with Arden in place of the late Anthoine Hubert.