Oliver Rowland finished fourth on the road but dropped to 10th in the final standings when a five-second penalty he picked up for a move on Markelov on lap one was applied.

At the start, Latifi led away from pole as his fellow front row-starter Jordan King made a poor getaway.

Rowland shot off the line from sixth on the grid and moved past the slow starting Sergio Canamasas to attack King for third on the outside of Abbey.

The Renault Formula 1 junior attacked his fellow Briton under braking at Village and moved ahead as they ran through the Loop.

But King kept his foot on the power around the outside and they rubbed wheels as they ran through Aintree, which led to King's retirement and cost Rowland momentum onto the straight.

He swung left to defend from Markelov but forced the Russian driver onto the grass, a move that earned him the 5s penalty - although the stewards absolved him of blame for the incident with King.

Latifi scampered clear in the lead, setting a string of fastest laps to build a large advantage in the early stages.

Rowland stalked Ghiotto, who had moved up to second as King got away slowly, and put him under immense pressure, but could not find a way by.

Markelov made it a three-way scrap in the closing stages and they were then joined by Leclerc, would had fought Canamasas - on three occasions nearly losing his front wing at the Loop as he tried to get by - for much of the race before eventually muscling through.

The big fight for second was paused when Ralph Boschung went off at high speed while attacking Alexander Albon on the approach to Stowe.

The Swiss driver went onto the grass on the inside, where he lost control, and speared into the outside wall.

His car was quickly cleared away after he climbed out and the race was restarted for a final lap blast to the flag.

Latifi held on to win by 1.7s, while Rowland attempted to shake things up by holding the pack back at the restart. 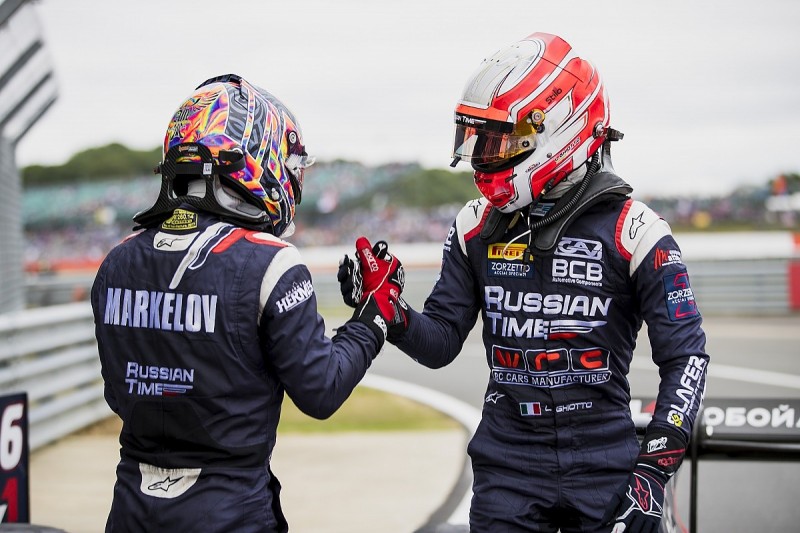 That allowed Latifi and Ghiotto to go clear but did not prevent Markelov from moving into a position to attack, which he did on the Wellington straight to take third.

Leclerc lost fifth on the road, a net fourth with Rowland's penalty, when Canamasas made a bold move around the outside of the penultimate corner stick.

Norman Nato was sixth, ahead of Nyck de Vries, who rocketed up the order from last on the grid at the start.

Callum Ilott came home 15th in his second F2 race in a one-off appearance for Trident.