George Russell scored a comfortable Formula 2 feature race win in Austria, although the Mercedes Formula 1 junior didn't lead for the majority of the race thanks to strategy

Russell made an early escape and built a gap of over a second, crucially, to keep pursuer Lando Norris out of DRS range.

But on lap six of 40, the safety car came out for Ralph Boschung, who stopped because of an engine issue, he kicked his car with frustration.

Nyck de Vries was forced to retire after locking up at Turn 3 with an apparent puncture. A change of tyres would have meant he wouldn't have any for tomorrow's race.

That ended Russell's initial time in the lead as he joined the majority in pitting, and Arjun Maini, Sean Gelael and Artem Markelov stayed out having started on the soft tyres.

Russell therefore ran fourth but in a net lead, and managed it brilliantly.

He looks deadly in his current form, every bit the future F1 driver he has the potential to become with a second feature race win in a row.

Fellow front-row starter and F1 hopeful Norris began to fall back, losing out to the incredible Roberto Merhi, who moved into a net second from 12th on the grid, with 10 laps to go.

Russell passed Gelael and Maini on track, with only Artem Markelov ahead of him, and once the Russian pitted four laps from the end, Russell inherited a lead he wouldn't lose.

Norris retook second from Merhi at the outside of the Turn 3 hairpin with two laps left, and pulled away to limit the championship damage as Russell ate into his advantage further and cut it to two points. 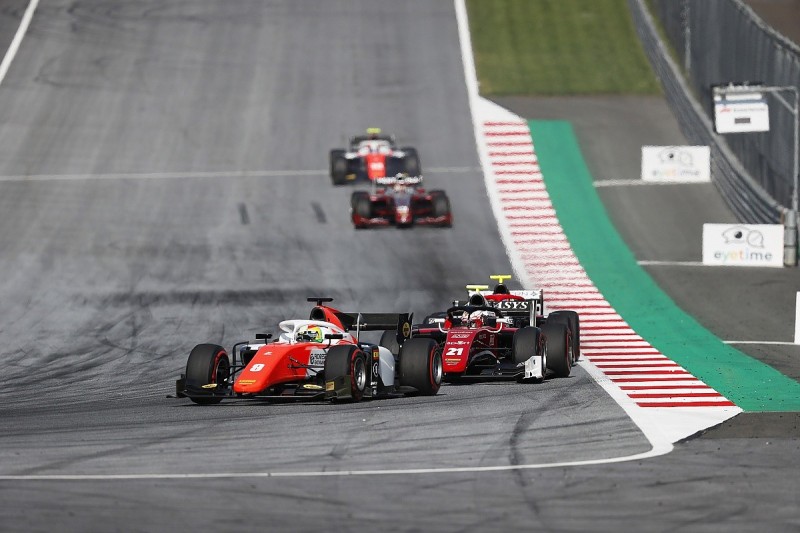 Merhi appeared set to be driver of the day, but Charouz Racing System driver Antonio Fuoco went from 13th to overtake him on the last lap in an incredible move around the outside at the downhill right-handers in the middle of the circuit, stealing Merhi's podium.

Fuoco pitted early in the race for a new nosecone after hitting Santino Ferrucci. He finished nine seconds adrift of a win after taking two pitstops to the winner's one.

Alexander Albon appeared to be nowhere all race, and could still fall down the order as he is under an investigation for an unsafe release during a chaotic pitstop lap.

But he took fifth on the road ahead of Sergio Sette Camara, who struggled to get going after the safety car on lap six, which cost him his original third position.

While many people around him saw their race fell apart, Tadasuke Makino looked after his tyres and the Russian Time driver and Honda junior will start second on Sunday's reverse-grid race thanks to his seventh-place finish.

Alongside him, on pole, will be Markelov, who incredibly overtook four cars on the last lap to seal eighth after his late stop.

Nirei Fukuzumi and Santino Ferrucci rounded out the top 10.

Jack Aitken had battled hard with Maxi Gunther and Louis Deletraz for fourth early on.

Gunther finally tore past at the unlikely overtaking spot of Turn 6 a lap before half-distance.

One lap later Aitken pulled off at the exit of Turn 1 after his fire extinguisher went off.

The Renault reserve driver believes a piece of rubber hit an external pullcord, a device marshals pull if they want to activate the extinguisher, shutting down the car in the process.

Gunther later fell back with tyre wear and took 12th, while Deletraz slowed and pitted to retire with an engine issue.