Red Bull junior Patricio O'Ward says he "never felt slower" after an "arse whipping" on his Formula 2 debut, but said the sprint race was a "major leap forward"

The Carlin IndyCar driver, who joined the Red Bull programme in May, stepped into MP Motorsport's second seat for the Red Bull Ring round in place of the banned Mahaveer Raghunathan.

He qualified two tenths off experienced team-mate Jordan King, but fell to last in Saturday's feature race in a race where many drivers experienced heavy tyre degradation.

"I got a proper arse whipping today to be honest," O'Ward told Autosport after the feature race.

"I don't know what to say. I've never felt slower in my life.

"I have to learn to manage this tyre. I dropped 45 seconds in a matter of 40 laps.

"I thought I was saving the tyres, and I was going slow to save the tyres, but they still went off." 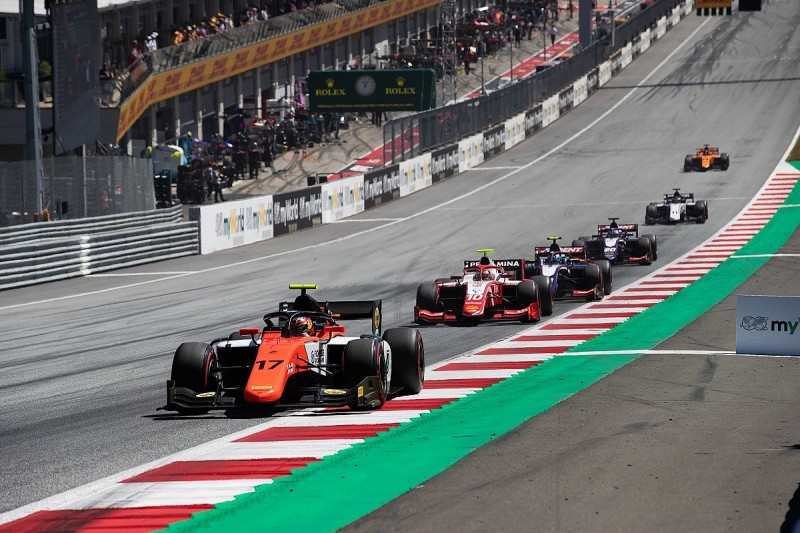 O'Ward took 14th in Sunday's sprint race, finishing 22 seconds behind winner Sergio Sette Camara in a race with 12 less laps than the feature.

"I thought that was a lot better," he said.

"Obviously it's not where we want to be, but I think it was a major, major leap forward and we could actually race.

"I think it will help to start further forward next time, and obviously just keep getting better and better.

"I end the weekend a lot happier than what I was yesterday [Saturday].

"Unlucky in the last few laps where a few people pitted and had fresh tyres.

"If it wasn't for that we would have been around the top-10 mark; that's great, starting last."

It was announced over the weekend that O'Ward would take dropped Red Bull junior Dan Ticktum's seat in Super Formula for the rest of 2019, while O'Ward also said his IndyCar season could be over and that he had the possibility of contesting more F2 rounds.

Raghunathan is expected to be back at MP Motorsport for the Silverstone round in a fortnight.

Two other drivers made their first F2 appearances of 2019 at the Red Bull Ring.

Ryan Tveter is attempting to find the budget to stay with Trident Racing at Silverstone after showing flashes of pace, while Arjun Maini has one more round left on his deal with Campos Racing.

Maini revisits the Silverstone round where his relationship with Santino Ferrucci collapsed. The then Trident team-mates clashed on track, after which Ferrucci was banned for two rounds.