After Tadasuke Makino had a bad start from pole, de Vries was behind early leader Nicholas Latifi and Louis Deletraz in the early running at Paul Ricard.

Deletraz unseated Latifi at Turn 1 with the assistance of DRS on lap four of 21, and looked to build an advantage.

But de Vries was soon rid of Latifi a couple of laps later and began to hunt down the leader.

De Vries stalked Charouz Racing System driver Deletraz, and finally moved into the lead on lap 13 at the entry to the chicane before the Mistral straight.

After that he drove off into the distance and and his winning margin was well over five seconds come the end of the race.

Deletraz sustained second comfortably ahead of Luca Ghiotto, who completed a strong weekend having been handed a podium on Saturday with the exclusion of Roberto Merhi from third place. 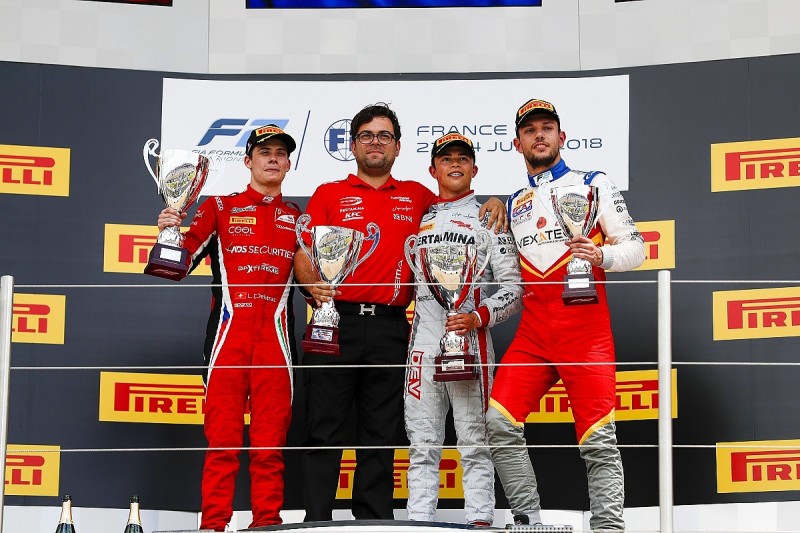 Antonio Fuoco appeared to be struggling but held Sergio Sette Camara at bay for a large portion of the race.

With six laps to go, Norris successfully attacked Carlin team-mate Sette Camara having made his way through the field from 16th on the grid.

Latifi struggled on his tyres in the latter stages and fell back from third, eventually being passed by Norris on the penultimate lap.

He then hit Norris in the left-rear trying to retake fifth from him at Turn 1 and shot off the road.

Norris held on without apparent damage to take fifth behind Fuoco, and his points lead now rises to 13 points as Saturday winner Russell was among a host of drivers who encountered technical issues.

Nirei Fukuzumi, Merhi, Ralph Boschung and Artem Markelov all stalled either on the formation lap or at the start.

Makino retired out of fifth with what he reported to be the same throttle sensor problem that forced Albon out of Saturday's race.

Sette Camara and Albon moved up to sixth and seventh on the last lap as Latifi's incident dropped him to eighth.

Santino Ferrucci pulled off some smooth moves to reach the top 10 in ninth, ahead of Roy Nissany.