The Ferrari-affiliated squad and reigning Formula V8 3.5 champions Charouz Racing System is not in Formula 2 "to fill a gap" and can win more races, says its team boss

The Czech outfit is new to F2 this year, having competed in Formula V8 3.5 for seven years before the series finished at the end of the 2017 season, a year it dominated with Pietro Fittipaldi.

The team has a number of new mechanics and engineers, but the core group moved over from the Formula V8 3.5 squad to start this season.

Its drivers Antonio Fuoco and Louis Deletraz scored a one-two in the Monaco sprint race last time out, with Ferrari Formula 1 junior Fuoco bagging the team's first win (pictured below).

Team leader Bob Vavrik is certain the team can continue to fight at the front despite a mixed start to the season. 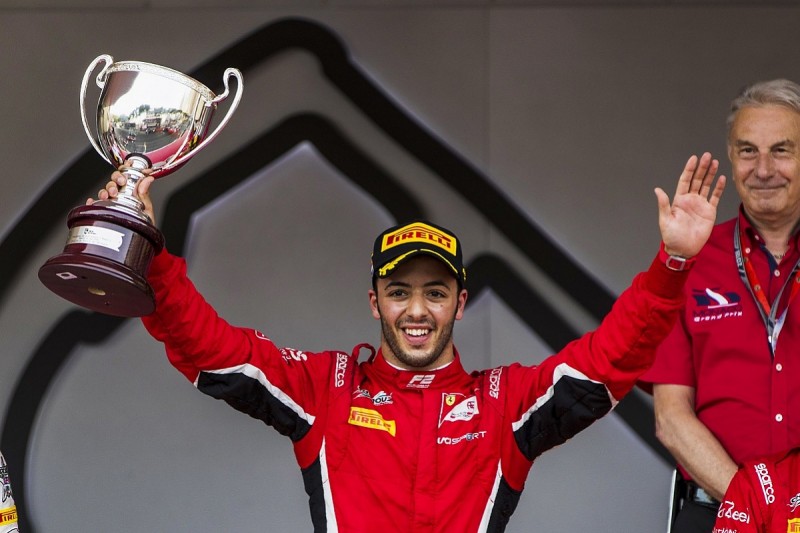 Charouz sits sixth out of the 10 outfits in the teams' standings, 81 points behind Carlin.

"Everyone here wants to win the championship," Vavrik told Autosport. "We are fighting with the others and we are not here to fill a gap.

"Both guys are on the pace and we've shown we can do good strategies. The motivation is always there so hopefully, we can keep it going now. The pace was very good this weekend [in Monaco]."

Ferrari academy junior Fuoco switched to the team from Prema Racing for this year and led the Baku feature race until smoke from Artem Markelov's expired Russian Time-prepared car allowed Alexander Albon to close in and pass him.

He then finished third behind Jack Aitken, scoring the team's first podium.

"It's a new team but we are working very well together," said Fuoco. "We have confidence between the driver and engineer.

"We believe in each other so it's a nice atmosphere in the team. The podium in Baku, it was good for the team.

"We need to keep working and pushing and trying to do more. Everyone knows when you win, everything changes. The motivation is certainly higher."

Fuoco lies eighth in the points after eight races across Bahrain, Baku, Barcelona and Monaco.

His race was all the more impressive, holding up Artem Markelov to seal third on the road before Deletraz was promoted after Lando Norris received a penalty post-race.

"We had a big problem," the Deletraz told Autosport. "The dash was frozen so I just had flashing [icons] everywhere.

"I couldn't see anything on the screen and five laps later my gearbox stopped working. I had to press the paddle like 25 times to change two gears.

"Coming into the corner I didn't even know what gear I was in, I think the last 20 laps were the hardest of my life.

"Artem put a lot of pressure on me, I could only defend. Overall I think we did a really good job."