Carlin driver Norris got a run on Mercedes junior Russell at half-distance for what was a net fourth in the race at that point.

McLaren protege Norris got a wheel alongside Russell at Curva Grande and had to touch the grass.

"I wouldn't say I was alongside but I had my front wheel alongside his rear," Norris told Autosport.

"I just got squeezed off.

"Then I had loads of crap on my tyres. I was sliding like hell for two laps and that's why I dropped off from George.

"Going at the speeds we were going at, at that point, it could have been quite dangerous.

"It was an unfair move, no doubt about it.

"I don't know what the stewards expect really.

"If I just stay there and don't let myself get pushed off, George would have been in the wall extremely badly and so would I.

"They never seem to do something when nothing happens, they just seem to wait until a massive crash happens and then do something." 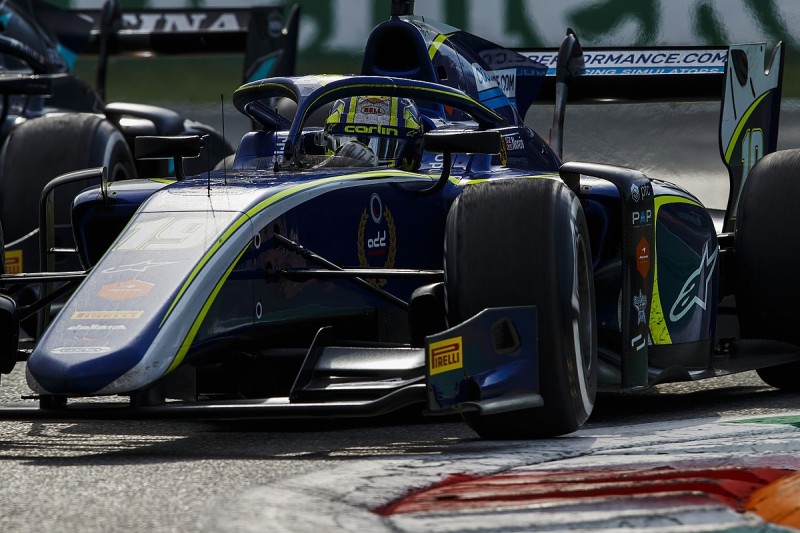 Norris added that he "was quite surprised" the incident was not investigated at least.

"It was a dangerous move and it cost me overtaking him and getting to the guys ahead," he said.

Norris believes the moment ended a chance to attack Artem Markelov and Alexander Albon for second and third, as Tadasuke Makino's strategy to take the mediums at the start - and maintain excellent pace on them - meant he was out of reach.

Instead, Norris was passed by Nicholas Latifi late on and had to settle for sixth - in part blaming the excursion to avoid Russell for his tyres going off late on - while Russell sealed fourth and extended his points lead to 13 with five races to go.

Russell said that the two - fighting wheel to wheel properly for the first time this season - had spoken about it after the race.

"I gave him one car's width through the corner and I think he ended up clipping the grass and it probably looked more dramatic than it was.

"We spoke to each other after the race about it, and I don't think there was anything dangerous about that."

Despite dropping to third from pole position, Russell still believed he could have win the race.

"I was a bit disappointed with myself, I think I lost the race with a lack of confidence on the brakes," he added.

"That was certainly the reason we dropped to P3 at the start.

"I felt we were very unlucky with after the pitstop I was right behind a backmarker, Roy Nissany, who [Markelov] also got the DRS from.

"I would have overtaken him and I believe I could have won the race."