Formula 2 driver Juan Manuel Correa's condition has worsened as he has developed Acute Respiratory Distress Syndrome, and is in a "critical but stable" condition following the crash at Spa

Correa - who is in hospital in an induced coma - is battling leg and spinal injuries from the crash last weekend.

Fellow F2 driver Anthoine Hubert had gone off the Spa track at Raidillon and bounced back into the road, where Correa hit him at full speed. Hubert passed away from injuries sustained in the crash.

Correa was initially treated in a hospital in Belgium before being moved to a specialist unit in London earlier this week.

But in the early hours of Saturday morning, Correa's family issued a statement confirming he had developed Acute Respiratory Distress Syndrome.

The statement - on behalf of Correa's father, Juan Carlos, and mother, Maria - read: "First of all, on behalf of our son we wish to thank everyone within and outside the motorsports community for the wonderful and caring get well wishes that we have received, as well as messages for a speedy recovery.

"We are confident that Juan Manuel will review them all himself once he is back in charge of his social media accounts.

"Honouring our son's straight-to-the-point and honesty that characterises him, we wish to update you on the status of his injuries and physical condition.

"As time has progressed, new complications have surfaced as a consequence of the massive impact he suffered Saturday in Belgium.

"On his arrival to London, Juan Manuel was diagnosed with Acute Respiratory Distress Syndrome.

"This is an injury considered common in high impact accidents such as this one.

"Juan Manuel is currently in an Intensive Care Unit that specialises in respiratory injuries.

"At this point of time, he is in an induced state of unconsciousness and under ECMO support.

"Juan Manuel is in critical but stable condition.

"We are confident that our son will surprise us, like he always does, with his tremendous fighting will and strength and will recover completely.

"At this time, we kindly request that our privacy and space be respected. As a family, we need to pull together and be 100% there for Juan Manuel.

"Maria and I wish to take this opportunity to give our condolences to the Hubert family for their loss.

"Our hearts are broken, and we can only imagine the pain this loss has brought them."

Acute Respiratory Distress Syndrome is caused by the inflammation of the lungs.

It is treatable but can cause further health implications in the future. 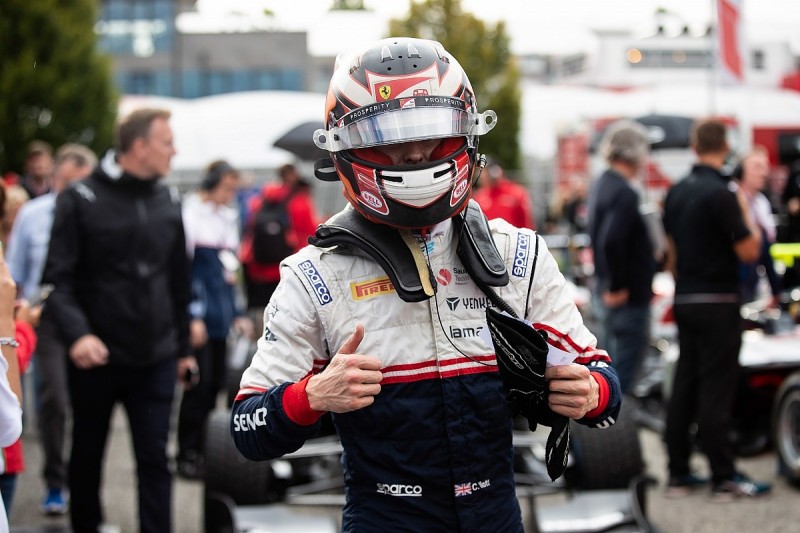 While Correa continues to fight his injuries, his Sauber Junior Team stable-mate Callum Ilott scored pole position for the F2 race in Monza, pictured above, dedicating it to Correa's recovery and his former-team-mate Hubert's family and friends.

A number of drivers in the Formula 1 support paddock are running stickers which read "stay strong JM" with his official logo in honour of Correa.