Gelael's withdrawal from Silverstone F2 round "matter of principle"

Sean Gelael says his decision to withdraw from the Silverstone Formula 2 weekend was "a matter of principle", after receiving a penalty following an incident in practice

Gelael collided with Louis Deletraz at Brooklands in Friday practice, while Deletraz was on an outlap and moving slowly with two wheels on the racing line. Gelael dived up the inside but hit the Carlin driver, with the resulting damage ruling him out of practice.

Deletraz was able to continue and went on to qualify fifth the following day, while Gelael qualified 18th - only to receive a three-place grid drop just hours before the feature race was due to start.

The Prema driver, who elected not to take to the track for the remainder of the weekend, said he was "shocked" at the decision.

F2 stewards have come in for criticism from teams and drivers in 2019, especially in Monaco where the grid was not reordered correctly in the pitlane under a red flag, Gelael being one of the drivers robbed at a chance of victory because of that mistake.

"The four years in F2 a lot of things have happened, especially this year, that are out of my control and extreme," Gelael told Autosport.

"For example, what happened in Monaco. It's not consistent.

"I think it's a matter of principle.

"If it was seen as a protest [Gelael not racing], I would not disagree.

"But for me it's a lot of things, you can't be so inconsistent in making decisions.

"When they told me the decision I was shocked and had no words to say.

"It wasn't just a protest, it was really where I draw the line in terms of how the things are handled in the championship and [by] the stewards.

"They gave me a reprimand and two penalty points. My thought was, 'You can't blame someone who is not wrong'.

"We tried to appeal, and we found in the rulebook that if you give a reprimand you can't also give penalty points.

"In the morning Guillaume [Capietto] the team manager went to talk to the stewards. We said, 'We don't agree with this, but if you give us the reprimand, we at least don't want the penalty points' as it was unnecessary.

"Apparently they just came back with the three-place grid penalty."

Deletraz, who spoke with his rival after the incident, said Gelael was not fully to blame.

"I have to agree that the penalty was quite harsh on him," said Deletraz. 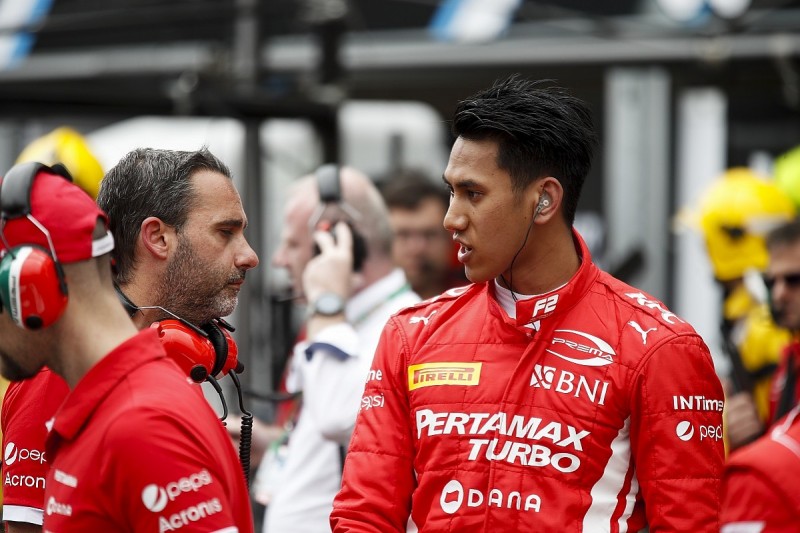 Gelael added he will use this week to consider his future.

"Moving forward we'll take a couple of days to calm our heads and regroup," he added.

"It's a decision between me and the team and my close group to see what the future holds.

"I think, not racing is influenced by a lot of things happening around me.

"It takes the fun out of everything, it takes the heart out of racing and if your heart isn't in it, what is the point at all."

The FIA declined to respond to Gelael's comments.