Alexander Albon took a second consecutive Formula 2 pole position by topping the charts at Barcelona, despite a risky call to sit out the end of the session

In Friday's earlier practice session, the track had improved significantly as time went on, but despite that, Albon and team-mate Nicholas Latifi sat in the pits for the final few minutes of qualifying, which gave their rivals a free shot at their times.

But Albon's benchmark, a 1m28.142s, was good enough to withstand a late flurry of efforts - including Prema Racing's de Vries, who could only finish 0.227s behind with his final effort.

Ghiotto, Russell and Aitken improved to round out the top five, which therefore left Latifi ruing his late spell on the pitwall as he fell to sixth.

Russell was one of several drivers who pointed to the wind as a reason for their struggling during the earlier practice, which he felt was unsettling his car.

"There's a very strong headwind, which consequently means you have a strong tailwind into Turn 4, Turn 7 and the high speed of Turn 9, so it's making it very tricky to drive through these corners," he explained. 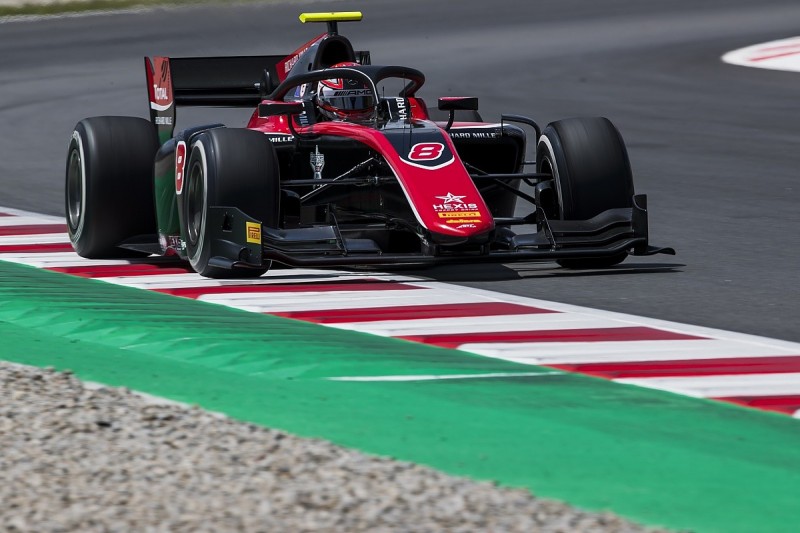 But set-up changes worked a treat in qualifying to boost the Mercedes Formula 1 junior ahead of Aitken, who is making his F1 test debut for Renault following this weekend's Spanish Grand Prix.

Russian Time's Tadasuke Makino took seventh ahead of Norris, who struggled to hook up a clean lap, something he also failed to do in practice.

The rapid right of Campsa (Turn 9) seemed to be the McLaren F1 reserve's bogey corner - it was where he ran wide in practice and then took too much curb on the inside on one of his qualifying runs, just after setting a purple first sector.

A disappointing session for Norris' Carlin squad, which leads the teams' standings after two rounds, was capped off by his team-mate Sergio Sette Camara slowing on track during the initial running.

The Brazilian driver's F2 2018 car suffered electrical problems, but he did return to the track at the end of the session. His time was good enough for 14th.

MP Motorsport duo Ralph Boschung and Roberto Merhi rounded out the top 10, while Artem Markelov's abysmal qualifying run continued as he ended up 19th, only ahead of the Santino Ferrucci (Trident), who crashed at the exit of Campsa in the final quarter of the 30-minute session.