Oscar Piastri held off FIA Formula 2 title rival Guanyu Zhou to score his second win of the season in the feature race at Monza to extend his championship lead.

The Prema driver converted pole position to secure his first win since the second Bahrain sprint in March, emerging victorious in a race that was interrupted by four safety cars, including one which led the field to the chequered flag.

Dan Ticktum finished third after Carlin took a huge gamble on pit strategy, starting the Briton on medium tyres when the majority of his rivals opted for softs.

When the majority pitted under the second safety car caused by Juri Vips (Hitech) pulling off on the exit of the second chicane, he stayed out but was afforded a lucky break when Vips's team-mate Liam Lawson also suffered a mechanical problem linked to his fire extinguisher on the start-finish straight.

With the advantage of much fresher, soft rubber, Ticktum carved his way up to third - surviving being punted over the run-off at the second chicane by Ralph Boschung - before contact between David Beckmann (Campos) and Bent Viscaal (Trident) resulted in another safety car with two laps to go, thwarting a possible challenge for victory.

ART driver Theo Pourchaire, who won the first race of the weekend, and second sprint race winner Jehan Daruvala (Carlin) were both powerless to hold Ticktum off, but finished fourth and fifth.

At the start, Piastri held the lead as fellow front-row starter Daruvala dropped behind Zhou and Lawson to fourth. Racing was then interrupted by Guilherme Samaia spinning into the wall on the exit of Lesmo 2, prompting a virtual safety car, which soon became a full safety car.

Racing resumed on lap five, with Lawson forcing his way past Zhou into second around the outside of Roggia, while Felipe Drugovich moved ahead of Daruvala to fourth.

The second safety car was deployed on lap eight, when Vips retired from seventh. Ticktum made slight contact as the Estonian slowed abruptly in the acceleration zone, but fortunately escaping without damage.

This left a flurry of cars heading into the pits, with the whole field barring Ticktum, Marcus Armstrong, Christian Lundgaard, Marino Sato and Alessio Deledda taking the free stop. Sato though was forced to retire on lap ten after his car cut out. 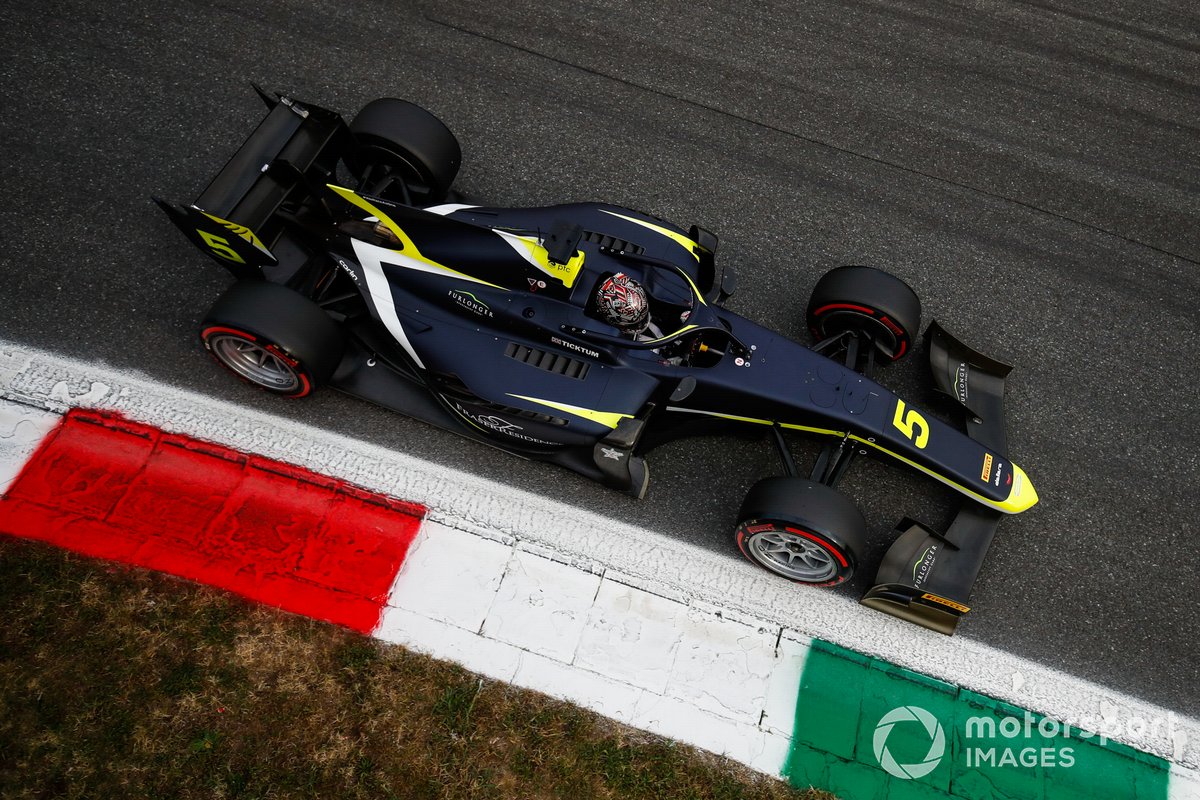 Action restarted on lap 11, with Zhou and Daruvala battling for a net third place. As the pair went side by side into the second chicane, there was contact that prompted Zhou to take to the run-off area, although he escaped sanction.

With Ticktum staying out in the lead, Piastri took third from Armstrong on lap 13, then took second from Lundgaard on lap 15.

As Piastri faced a challenge from the newly-promoted Zhou into the second chicane, the two going side-by-side with Piastri holding on, Ticktum was punted by Boschung but remarkably managed to avoid clattering any further cars and continued - his initial fears of a puncture rebuffed by the team - although he was referred to the stewards for not rejoining via the right-hand side of the marker board as stipulated by the race director.

The two-time Macau GP winner had made it up to fifth by lap 27, before nipping past Pourchaire into the first chicane two laps later.

He then passed Daruvala into the Parabolica corner, but the Beckmann-Viscaal tangle ensured Ticktum could get on terms with Piastri and Zhou.