Honda protege Tadasuke Makino scored a phenomenal first win in Formula 2 at Monza from 14th on the grid, as George Russell extended his championship lead over Lando Norris

Makino struggled with his brake markers compared to his rivals in tricky conditions in qualifying, but started the race on medium tyres and used them to blitz through the field from well outside the top 10.

He showed no signs of inexperience in the race as he took the lead on lap nine when Russian Time team-mate and then leader Artem Markelov headed a train of cars into the pits.

As the stops cycled through, Makino's gap over Markelov grew to more than 40 seconds. Makino pitted at the end of lap 27 of 30, emerging just over three seconds ahead of Markelov, and held on to win as Alexander Albon beat title rivals Norris and Russell to the podium.

It was an emotional scene in the holding area as Makino sat on the halo, which he said saved his life earlier in the year after a crash at Barcelona.

At the start, Markelov and Albon jumped a slow-starting Russell, while Norris also got a poor start and fell behind Trident's Arjun Maini. 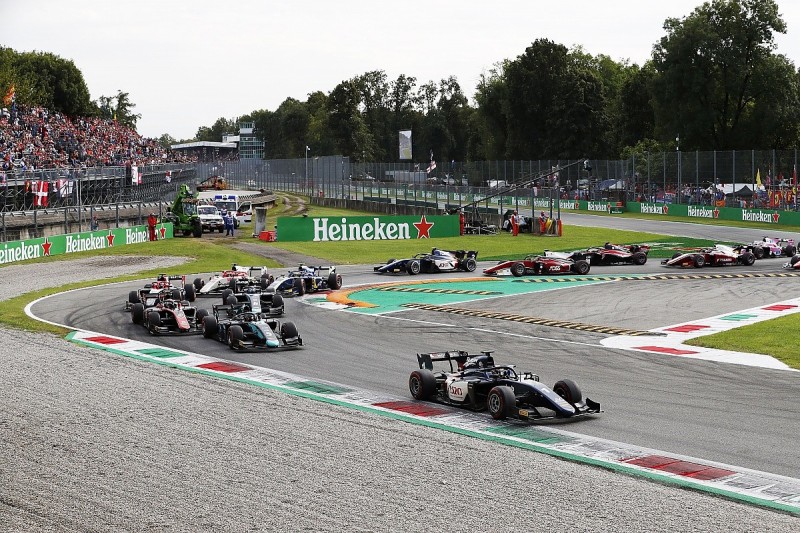 All the leaders then pitted together on lap eight.

A slow stop for Carlin driver Norris dropped him two spots, behind Maini and Nicholas Latifi, both of whom he had passed prior to the stops.

But his pace was rapid on the medium tyres, fighting past both quickly before hassling Russell in a fight for a net fourth.

Norris used the grass to attempt a pass heading to Turn 4 and failed, before making a move stick at the two-thirds distance exiting the first chicane and through Turn 3.

Russell was not deterred though and dived at Turn 1 a lap later, unsuccessfully, before retaking the spot at Turn 1 on lap 23 and keeping Norris at arms length - despite him being in DRS range - for the remainder of the race.

Latifi - Albon's DAMS team-mate - also passed Norris on the penultimate lap to take fifth and put another car between the title rivals.

Russell started the race nine points ahead of his fellow Brit, but Norris now trails by 13 points with five races to go.

Behind Norris, team-mate Sergio Sette Camara executed a spectacular drive from the pits - having been second on the grid, he struggled to get his car going on the formation lap, which meant his mechanics were on the grid too late - to take seventh.

Ralph Boschung, one of two MP Motorsport drivers like Makino to start on the medium tyre, pitted one lap before Makino and was passed late on by Fuoco.

He ended up ninth ahead of Nyck de Vries, who had a throttle sensor fail in practice that compromised his qualifying and limited him to 13th.