Alexander Albon took a brilliant Formula 2 sprint race victory in Budapest, as championship leader George Russell recovered to score the final point after starting at the back

In the first dry start since F2 introduced a new clutch basket and software, everyone got away successfully.

Luca Ghiotto made a rapid start to take the lead at the first turn while Jack Aitken got another poor start, as he had done in Saturday's feature race, from fifth.

Albon jumped into second behind Ghiotto on the run to Turn 1, as front-row starters Artem Markelov and Sergio Sette Camara dropped back, with the latter moving ahead of polesitter Markelov.

Albon's key move for the lead came on lap 24 of 28, after he had eroded Ghiotto's well-guarded long-time three second lead.

The DAMS driver dived down the outside at Turn 1 to take a lead he wouldn't lose, despite slight contact between the pair at the exit of the corner.

Sette Camara went unchallenged for most of the race to take third, despite being hit hard from behind by Antonio Fuoco after the VSC restart early-on.

Lando Norris moved up to fourth on lap 19 with a scintillating move, which followed Nyck de Vries trying to pass Markelov into Turn 1.

But when de Vries could not pull it off, Norris executed an epic double overtake on the pair, dispatching Markelov around the outside of the downhill left of Turn 3.

Roberto Merhi then capitalised and passed de Vries for fifth at the chicane, as the Dutchman tumbled from fourth to sixth in the space of a lap.

Both Markelov and de Vries were struggling with their tyres and dropped further back, although de Vries appeared to recover after being passed by Norris and Merhi.

But at the finish line, de Vries was jumped for sixth by a resurgent Honda protege Nirei Fukuzumi. 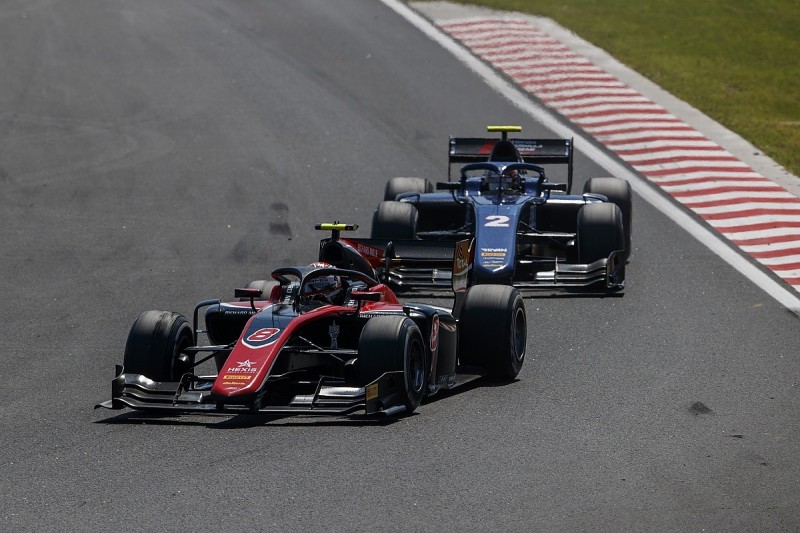 If any proof was needed of Russell's credentials, he offered more in Hungary.

He started 20th but worked his way up the order to pass his ART Grand Prix team-mate Aitken on lap 26.

Russell took eighth and the final point awarded in the sprint race.

That did little to stop Norris eating into further his standings lead - the gap between the pair is now down to 12 - but it will have captivated the F1 paddock, which is moving closer to the Mercedes junior.

Louis Deletraz also passed Aitken for ninth, as the British-Korean driver's tyres were gone late in the race and he ended up 10th.

Markelov ultimately fell to 13th - despite normally being a wizard on the Pirelli rubber - but he struggled massively on this occasion.