Albon: Racing against F1 juniors in F2 proves my worth as a driver

Albon scored his first F2 win in a chaotic Baku feature race, and lies second in the points behind McLaren F1 junior Lando Norris, despite stalling on the grid in the sprint race and not scoring.

Albon says holding his own against drivers of such calibre can only be a good thing as he aims to prove he is also capable of having a future in F1.

"To be honest, last year I was struggling a little bit, especially mid to end of the season," Albon, who finished 10th in the points last year with ART Grand Prix, told Autosport.

"It's good for me in terms of being able to mix it with the guys who [are with] F1 junior teams. It does get my name out there, proves to the sponsors that, I am worthwhile." 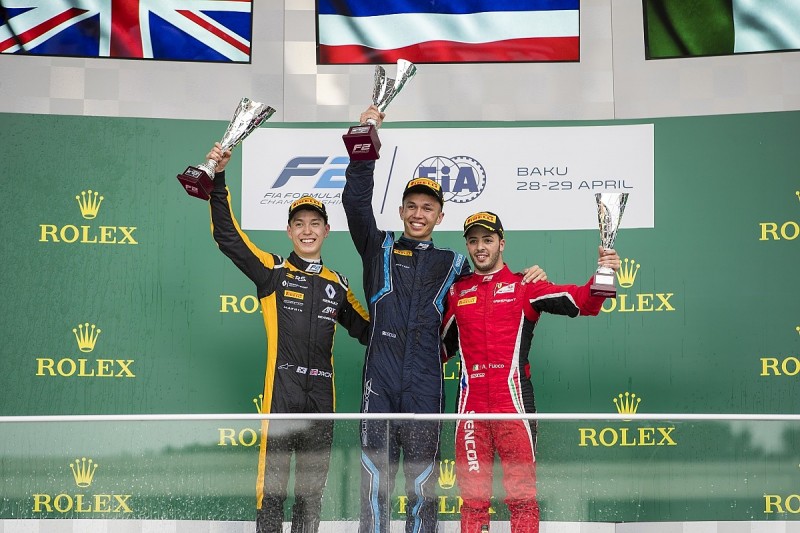 Albon has previously been part of two different F1 young driver schemes himself, having enjoyed Red Bull backing as a Formula Renault 2.0 driver in 2012 and then joining the Lotus F1 junior team the following season, remaining on its books until '15.

"I've experienced this kind of feeling where you have a bit of pressure, if it's from F1 teams - junior F1 teams - or sponsors, it's still kind of the same thing in the end," added Albon.

"There's one thing I've learned a lot from this year to last year, to just really be on top of it [the pressure]. And that's how I feel this year so far.

"I always saw myself as potential contender. I've always, in that sense, believed in myself to some extent. And I'm happy with how it's going so far.

"Obviously [Norris and Russell] are really the young guys who are really making the breakthrough, going into F1 basically.

"So it's nice to be at least showing my face and mixing it with them, and hopefully it opens up doors."

Albon is not yet sealed for the entire F2 season, but said he expects to receive confirmation of a full-time deal with DAMS "any time soon".