Matthieu Vaxiviere set the quickest time in both Formula Renault 3.5 practice sessions at the Hungaroring on Friday

The Lotus F1 junior driver recorded a 1m31.232s in the morning, before improving his time to 1m29.514s in the afternoon's second 50 minute session.

"Everything was fine, except I had some sweat in my eyes while I was driving," said Vaxiviere, who is chasing his third win of the season this weekend. "The heat here was really horrible."

ALBON STANDS IN FOR VAN BUUREN

On his debut outing in a FR3.5 race weekend, Signature European Formula 3 regular Alexander Albon took an impressive fourth in the morning for Lotus. 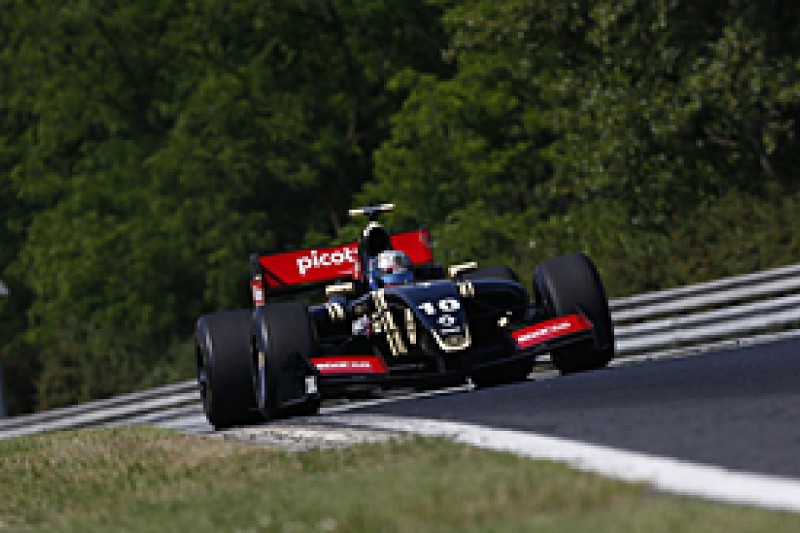 Albon occupied the seat usually taken by Meindert van Buuren, but Lotus's team-manager has confirmed the Dutchman will be back in the car for this weekend's races.

Championship leader Oliver Rowland was quickest for much of the morning session, before being demoted to fifth.

Rowland's Fortec team-mate, and this year's Monaco victor, Jazeman Jaafar was bottom of the timing screens in practice one after failing to set a single competitive lap.

"We had a gearshift problem, and in trying to fix it the clutch overheated," said Fortec team manager Jamie Dye.

"So when we had repaired the problem and tried to go out again we encountered the clutch problem."

Gustav Malja posted an early strong time in the morning before slipping to sixth as he devoted the final 10 minutes to pitstop practice. The Swede narrowly edged out McLaren-backed racer Nyck de Vries.

Albon had been quickest at the time of the incident, 0.172s ahead of team-mate Vaxiviere, but the London-born Thai slipped to seventh following a flurry of quick times in the dying minutes.

Jaafar recovered from his earlier misfortune to take fourth in practice two, ahead of Ellinas and Orudzhev.

Since the previous round at Spa, FR3.5 has abandoned the mandatory use of low-downforce settings in its Saturday races.

Friday pacesetter Vaxiviere's Charouz-run Lotus team was in a minority of those who wanted to continue with the low-downforce regulations.

"It's not really a problem because we know we have a quick car," said Vaxiviere.

"I did like the LDF as it added something different to the weekend, but the decision has been made."