Mitch Evans secured a scintillating Rome E-Prix victory from ninth on the grid to kick off his Formula E title aspirations after a tough start to the 2021-22 season.

The Kiwi driver enjoyed a happy return to the circuit in which he scored his and Jaguar's first Formula E victory in 2019, turning a first-act surge through the field into a dominant second-half display to cross the line 5.7 seconds clear of Robin Frijns.

On a hectic first lap, which concluded with a safety car for Maximilian Guenther's wall-ensconced Nissan e.dams car, Evans picked his way past the two Porsche cars of Pascal Wehrlein and Andre Lotterer.

He was then on the back of Jake Dennis once the race had resumed on lap 4, and the two traded positions on track during the first phase of attack mode; Evans picked up his opening activation on the ninth lap and eventually used it to charge past Dennis - although the Avalanche Andretti driver then returned the favour.

But Dennis' contact with Antonio Felix da Costa, in which he performed a bump-and-run pass on lap 11 to clear the DS Techeetah driver, also allowed Evans to trickle through - Dennis earning a five-second penalty for his part in the contact.

With Jean-Eric Vergne then taking his second dose of attack mode on the following lap, Evans was in fourth and reeling in the leading trio of Stoffel Vandoorne, Frijns and Nyck de Vries; conveniently, the latter began to ail and dropped behind the charging New Zealander.

As Vandoorne and Frijns were battling over the lead, Evans then drew his second attack mode and regained the ground he'd lost to the duo at the front.

Frijns then dispatched Vandoorne, leaving the Belgian vulnerable to Evans' overtures - and was effectively defenceless against his attack mode activation.

Although Frijns put in a typically gutsy defence of his lead, he was treading water against Evans - and the latter moved to the front on the 18th lap. 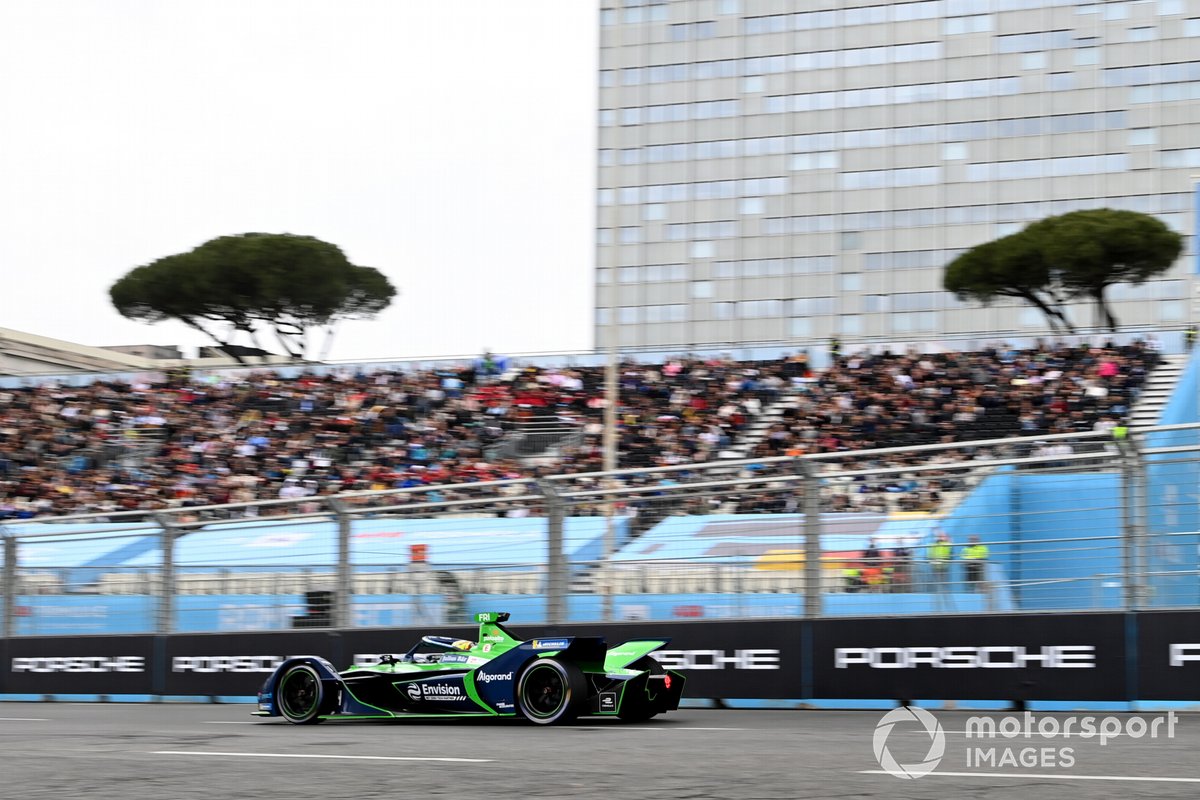 Frijns battled gamely with the Mercedes to get into the lead, but lost out to the charging Evans

Evans could simply afford to sink his energy into extending the lead, which was at its zenith of 7.5s with three laps remaining - helped by Frijns and Vandoorne continuing to squabble over second, with the two stuck behind Dennis for a spell when the British driver charged up to second before hitting energy conservation mode.

In order not to extend the race to 28 laps and guarantee making it to the end with the useable energy - after five minutes and 15 seconds were added on for the early safety car period - Evans backed out on the penultimate lap, but had more than enough in hand over Frijns to cruise to an exceptional victory in Rome.

Frijns and Vandoorne traded places all race long, but the Dutchman's lap 26 pass into Turn 4 proved to be the silver bullet in securing second place over the polesitting Mercedes driver.

Vergne hustled the two for a second successive podium but was unable to make a compelling pass on Vandoorne, while Sam Bird recovered from a lowly 13th on the grid - and evaded the lap 1 fracas at Turn 7 - to claim fifth.

There, championship leader Edoardo Mortara tapped Oliver Rowland into a spin at Turn 7 on the opening lap, creating a logjam into the corner that collected Lucas di Grassi, the two Nissan e.dams cars and the two NIO 333 cars, as the Dragon/Penske Autosport pair slipped through the net. The resulting damage from the pile-up produced Guenther's lap 1 accident.

Da Costa shuffled up to sixth after Mortara's five-second penalty for that lap 1 incident took effect, but the gap between the front seven and Wehrlein meant that Mortara only dropped to seventh, with Porsche comparatively off-colour compared to its Mexico heroics.

Nick Cassidy took ninth from Lotterer, who spent a spell outside of the points but was re-admitted into the top 10 after Dennis slipped down the order with energy concerns.

De Vries was a factor in the battle for the podium in the early stages but, after Evans had brushed him aside, began to plummet down the order - and eventually retreated to the pits for an early bath.