The Nissan e.dams team has delayed the introduction of its Formula E car for the 2020-21 season until April under the new cost-saving homologation regulations

Nissan agreed to a ban on the twin-motor powertrain set-up it used during the 2018-19 campaign in an effort to control team spending.

That put the team on the backfoot last year as it had to revert to a single-motor design and begin a new development path.

But during the six-month pause between the Marrakech E-Prix and the first of six Berlin race that resulted from the global pandemic, the team made significant progress with its software.

That permitted 2015-16 champion Sebastien Buemi to climb from 11th in the drivers' standings up to fourth in the final points, including three podiums from the final five races.

Similarly, team-mate Oliver Rowland rose from ninth to fifth in the championship after he scored his maiden FE win in the penultimate race of the year from pole position.

Nissan e.dams has confirmed it will continue with the IM02 machine for the first four races of the new season before introducing a new powertrain system in April. 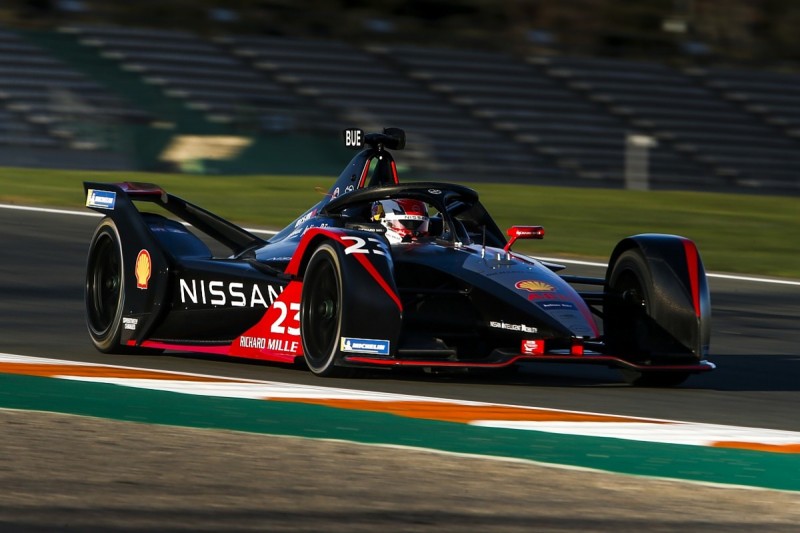 The team still hosted an official launch, which took place in the pitlane after the first day of pre-season testing at the Circuit Ricardo Tormo in Valencia.

Nissan's decision to delay the car until the Rome E-Prix falls in line with revised homologation rules brought in as a result of the pandemic.

Teams such as Audi, Mercedes and Mahindra Racing have opted to run an all-new powertrain, which they will have to retain for two seasons.

The second option is to carry over the existing car for 2020-21 and then introduce a new set-up for 2021-22 that must be used for the following year also.

Nissan, however, have followed the lead of reigning teams' champion DS Techeetah by staggering the introduction of its machine part-way through the campaign.

Buemi said: "I think we did a good job last year in finishing second in the teams' championship. We came from P4 in our debut season [2018-19 when Nissan took over the e.dams FE squad from sister company Renault], so there is one more step to reach.

"We've come [to Valencia] with a few updates that will help us challenge the big guys."