The DS Virgin Racing driver, standing in for Jose Maria Lopez, beat Daniel Abt to triumph in the pole position shootout by two tenths of a second around the Brooklyn circuit.

Lynn was quickest in a damp FP1 on his FE debut, and carried that pace into qualifying by making it into the superpole at the first attempt.

Abt nailed a front row start by edging Techeetah's Jean-Eric Vergne by just 0.003 seconds, with Lynn's team-mate Sam Bird a further 0.020s back.

Jerome d'Ambrosio gave the beleaguered Faraday Future Dragon Racing event something to cheer at its home race with the team's first superpole appearance of the season. 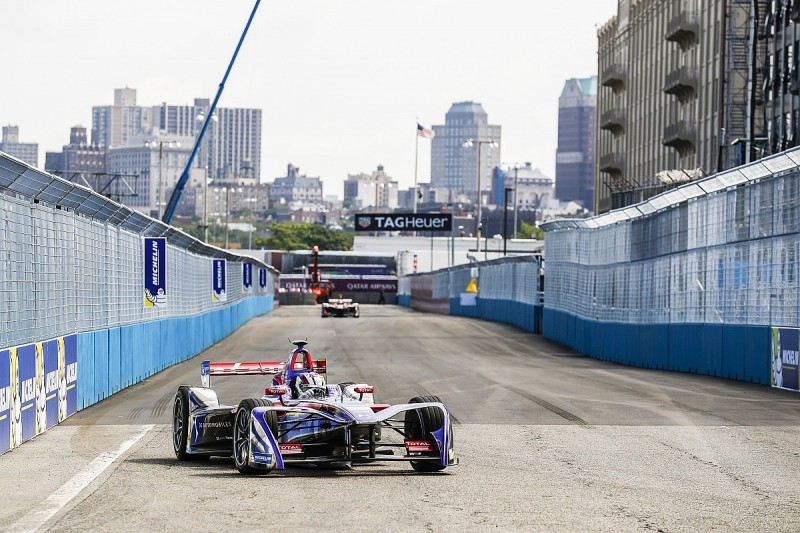 After setting the second-best time in the group stage a mistake at the start of the lap immediately consigned d'Ambrosio to the slowest superpole time, although fifth is still the team's best starting position of the campaign.

While Lynn celebrated a shock pole, his fellow rookie Pierre Gasly, parachuted in for championship leader Sebastien Buemi at Renault with no preparation, fared less well.

He was slowest of the five runners in the opening group and will line up 19th, only spared qualifying last by a problem for Maro Engel that stopped the Venturi driver on track before he set a 200kW lap.

Di Grassi complained of a yellow flag, thrown for Engel's stopped car, on his flying lap, but his poor grid position will be music to the ears of the absent Buemi, who like Lopez is on Toyota LMP1 duty at the Nurburgring World Endurance Championship round.

Another driver hoping to take advantage of the missing points leader is Felix Rosenqvist, but the Berlin race winner will start the opening race towards the back of the grid.

Rosenqvist topped FP2 but a lurid slide at Turn 1, the hairpin that is located halfway round the qualifying lap thanks to offset timing beams, cost him time on his qualifying flier and left him 17th.