Envision Virgin driver Frijns made a clean start from pole position but was unable to shake off new Jaguar signing Bird, who had cleared the Dragon of Sergio Sette Camara to move up to second.

The gap between the two remained stable at 0.5s in the first half of the race and although Frijns briefly fell behind Bird when he took his attack mode, he was able to take advantage of the extra power to blast back past him into the lead.

However, Frijns then reported on the radio that he had been overconsuming his usable energy and was forced to back off to ensure he could make it to the chequered flag.

This brought Bird into play and, after a failed overtaking move at Turn 18 on Lap 21 where he ran wide, the British driver dived down the inside of Frijns in what turned out to be the deciding move of the race.

Crucially, he was able to complete the pass before a number of crashes at the same corner led to the race being curtailed and sealed the victory.

Speaking afterwards, Frijns admitted that Bird was "smart" enough to save energy while circulating behind him in the early stages, and this proved to be crucial in deciding the outcome of the race.

"Sam in the beginning of the race was under-consuming a bit behind me, as he can always under-consume a bit while driving behind another car," Frijns said.

"So I think he did a really smart race on that. Just a bit of the shame that my second attack mode didn't really work out that as I had in my mind. I took attack mode just before the full course yellow [for the incident between Jake Dennis and Pascal Wehrlein] came out so basically I chewed [it] away.

"Sam obviously took it later and basically overtook me heading into 18 [after his attack mode was over]. I couldn't really defend from it, even though I tried.

"But energy played a big role for me in the race because I always felt on the limit of overconsuming and hitting my target. I think at the end we managed to recover a bit throughout the race."

Bird, who maintains his record of scoring at least one race win in every Formula E season so far, praised his former team-mate for playing it fair on track.

"It really is a pleasure racing someone like Robin who is clearly world class but also will allow you room and we could really race and race fairly," said Bird.

"I think we both raced smartly. We didn't really lose too much time together. Didn't scratch, didn't touch. It was just nice, good racing." 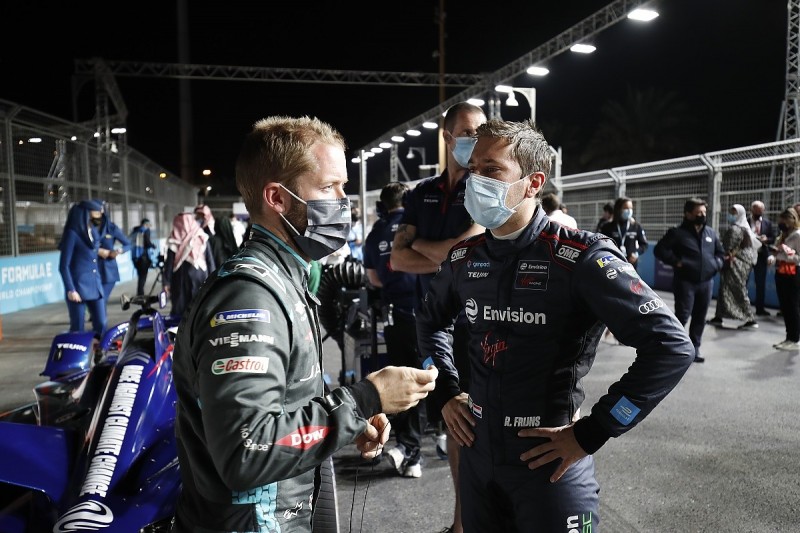 Frijns said having an understanding of how Bird behaves both on and off track from his previous experience as team-mates in the last two seasons didn't change his approach in their wheel-to-wheel battle for the lead.

"We know each other really well, especially for the last two years," the Dutchman said. "We go back to even 2012 when we were racing each other [in Formula Renault 3.5, where Frijns won the title].

"You kind of understand how your team-mate is driving and how he does things in the team, that happened with Sam for the last two years.