With 2m40s of the group one session to go, Evans headed out on track as Rowland emerged from the Nissan e.dams garage - situated further down the pitlane - meaning Rowland got out marginally in front.

Audi racer Rast was some way behind but he and Evans spent the majority of their preparation lap stuck behind Rowland and unable to find clear track space.

Evans' race engineer Josep Roca reported over team radio that his driver was "one second out of plan", as only Rowland crossed the line in time to then deliver a full-power lap.

Rowland ended the group run 0.8s clear of next quickest Pascal Wehrlein for Porsche, as Evans and Rast were 5s in arrears as a result of only being able to set a build-up lap.

Evans also failed to set a flying lap in the Marrakech E-Prix last season, which followed immediately after his Mexico City win, when Jaguar sent him out too late.

Evans told Autosport: "I know from the outside it probably looks like we made a stupid mistake again, but this one was a little bit different.

"I left the garage at the same time as I did the day before and then I had no issues. I had a car in front of me this time that decided it didn't want to go.

"It was done deliberately to screw us behind, which is not on. He completely screwed us. 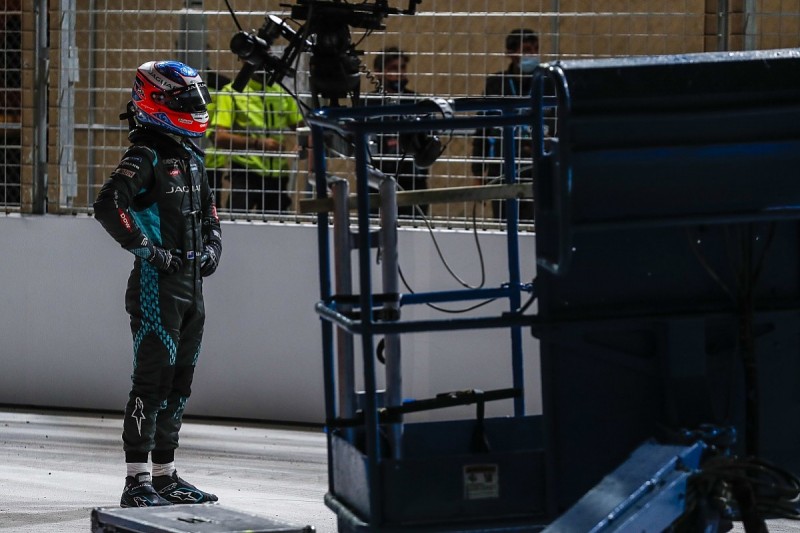 "That's the only thing about where we are in the pitlane - they can react to what we can do.

"He came out right in front of us. He was going slow in the pits, exiting the pits slow, by the time we got to Turn 5 on the out-lap we were already behind schedule.

"You try and pass but it's not really possible through the middle section. Just silly.

"From the outside it probably looks like, 'why didn't you leave 10 seconds earlier?' But if you're first on track in group one you're toast.

"We weren't actually trying to run any risk but we got pinched in a hole with him trying to screw us. He did that. It's just not right."

Rast added that Rowland "slowed down... obviously it ruined our qualifying."

But speaking to Autosport, Rowland said: "We usually leave a bit of margin, my engineer gives me a bit of margin and I took that because I didn't want the guys behind to benefit.

"My engineer tells me how long I've got and how much margin I've got to my push lap.
"He tells me if I need to push or not and he was telling me to push all the way.

"I took more margin and obviously they were in the shit."