Mortara set the sixth-quickest time in free practice three ahead of the second night race on the Riyadh Street Circuit but suffered a heavy crash after the 45-minute session had finished.

He completed his practice start alongside Mercedes' race one winner Nyck de Vries on the grid before, what appeared to be, a car failure left the Swiss racer unable to slow for Turn 18.

His car carried straight on at high speed and buried itself in the TecPro barrier.

Mortara was taken by ambulance, escorted by both Venturi and Mercedes personnel, to a local hospital for a precautionary assessment.

Both Venturi Racing team staff and a spokesperson for the FIA confirmed to Autosport that Mortara was conscious, talking and could move his fingers and toes.

With the Venturi Racing team a powertrain customer of Mercedes, the FIA have stopped both teams from taking part in qualifying until the nature of the failure has been resolved.

A Venturi statement read: "Initial evaluations suggest that the accident was a result of brake failure. The team will continue to investigate this thoroughly ahead of qualifying and race sessions."

Mercedes team principal Ian James confirmed that the engineers were looking into the braking system. 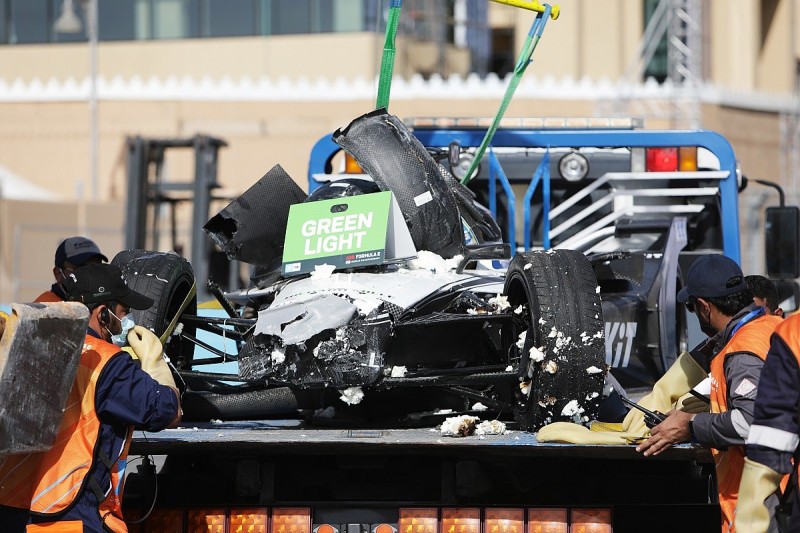 "After anything like that, you need to make sure it won't happen to the other cars, which are effectively identical. We've not proved yet that it is the case.

Clearly it's the right decision from the FIA. The engineers are working hard to make sure we can put all that relevant information together to get us back in the game again.

"We're well underway of knowing which area to look at. I think we know what the failure was but we need to make sure it can't happen on other cars.

The incident appeared similar in nature to the free practice crash that required former Audi driver Daniel Abt to be airlifted to hospital in Mexico City.

That shunt was attributed to an error occurring after Abt deployed fanboost, which meant his rear axle did not slow the car on the approach to Turn 9 and he registered a 20-G impact.

Abt posted on social media: "Really hope Edo is fine.

"FIA has to make sure Formula E cars can't accelerate by themselves.

Venturi Racing team principal Susie Wolff has said it is Mortara's choice whether to contest the race or not.

"That's Edo's car and if Edo's fit to drive he will be taking part in the race.

"It will be his decision."

Although FIA Formula 3 race winner Jake Hughes was recently signed by the team as a reserve driver, he did not take part in a practice session and so is ineligible to take the seat.