Buemi had led the standings by 10 points ahead of last weekend's Montreal title decider, but forfeited his championship lead to eventual champion Lucas di Grassi in Saturday's first race.

He finished fourth on the road while di Grassi won, but was later disqualified after his car was found to be underweight, and could only finish 11th in Sunday's final race after a mistake in qualifying and first-lap damage.

In addition to his Montreal exclusion, Buemi also lost a fifth-place finish in Berlin for running illegal tyre pressures and missed the New York double-header as his Nurburgring WEC commitments with the Toyota LMP1 squad took priority.

"I've no regrets at all with my performance, I think I've done a good job," Buemi told Autosport.

"When you get disqualified twice and lose 22 points, plus miss two races in a championship which only counts 12 races what do you do?

"The biggest problems obviously were to miss the two races [in New York] and the disqualifications."

Buemi had led the championship by as much as 43 points midway through the season, but ended up 24 short of di Grassi's winning total.

The pair had engaged in a public war of words before the title decider, but Buemi was gracious in defeat and congratulated di Grassi publicly after the final round in the post-race media pen.

"I'm disappointed I didn't win but I don't take anything away from Lucas, he has done a great job," he added.

"He competed in all the races and he deserved the championship." 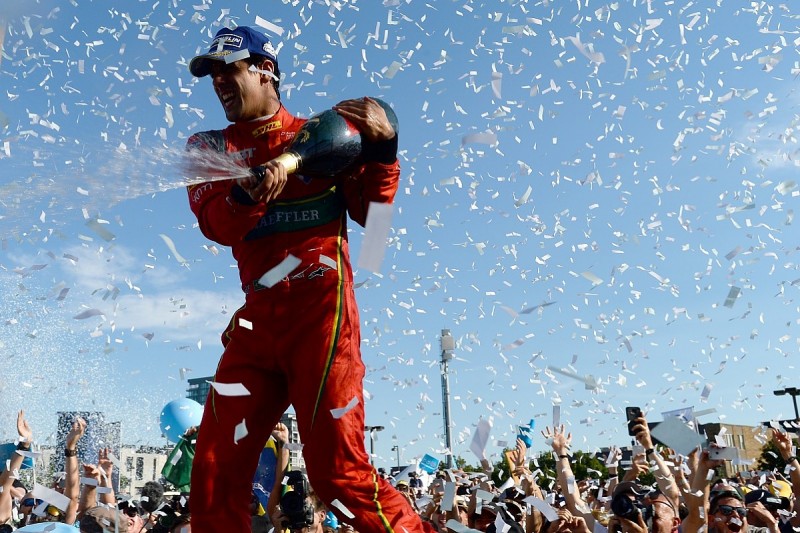 Di Grassi, who won two races across the season to Buemi's tally of six, said winning the title in FE's most competitive season so far was a fulfilling achievement.

"Our car was the least competitive [compared to Renault e.dams] when you take it season by season since the start of the championship but we still managed to do it.

"This year there were four teams - us, Renault, DS Virgin and Mahindra - fighting every race and it was much more complex.

"This year the level has been the best ever in terms of drivers.

"Every group in qualifying was intense, the quality is super high here and you have to squeeze everything out of yourself and the car."

He added concentrating on one championship - after Audi's withdrawal from the WEC left him without a drive in that series - had helped his campaign.

"The other thing was that I was fully committed to the championship after stopping the WEC with Audi," said di Grassi.

"That clarity and focus was beneficial, there is no doubt."