Edoardo Mortara converted his maiden Formula E pole position into a well-controlled victory at the Berlin E-Prix, seeing off a late threat from Jean-Eric Vergne to win by 1.7s.

Mortara pounced upon a mistake from Vergne, who was baited into attacking the Venturi driver at Turn 6 with three laps remaining and went deep - recovering but shipping over a second to the leader.

This gave Mortara free licence to extend his lead and rocket off into the distance, ensuring he claimed his second victory of the year to get back among the top four in the drivers' championship battle.

Having resisted the temptation to eat into his final attack mode until the 31st lap, Mortara had waited until the chasing Stoffel Vandoorne and Andre Lotterer's own final attack mode activations began to tick down, giving him a surplus of time with 250kW power over his rivals.

Lotterer, in the lead by that point, was usurped by Vandoorne and Mortara once the Porsche driver's attack mode had elapsed, but Vandoorne soon fell victim to the similarly Mercedes-powered Venturi at Turn 6.

Vergne then powered into contention and brushed Lotterer aside, before employing his fanboost activation to nip past Vandoorne into second.

The DS Techeetah driver, who had shaken off qualifying disappointment after failing to progress to the final despite setting exactly the same laptime as Alexander Sims in their semi-final bout, was then beginning to hustle Mortara for position as he had an extra percent of energy entering the final laps.

Mortara got back on energy terms with Vergne as the Frenchman continued to give chase, and immediately anticipated a move from Vergne into Turn 6 on lap 38.

Forced to go wide, Vergne lost his carefully gathered momentum and had to spend the final throes of the race keeping Vandoorne and Lotterer at bay, proving to be something of a roadblock at the conclusion of the race. 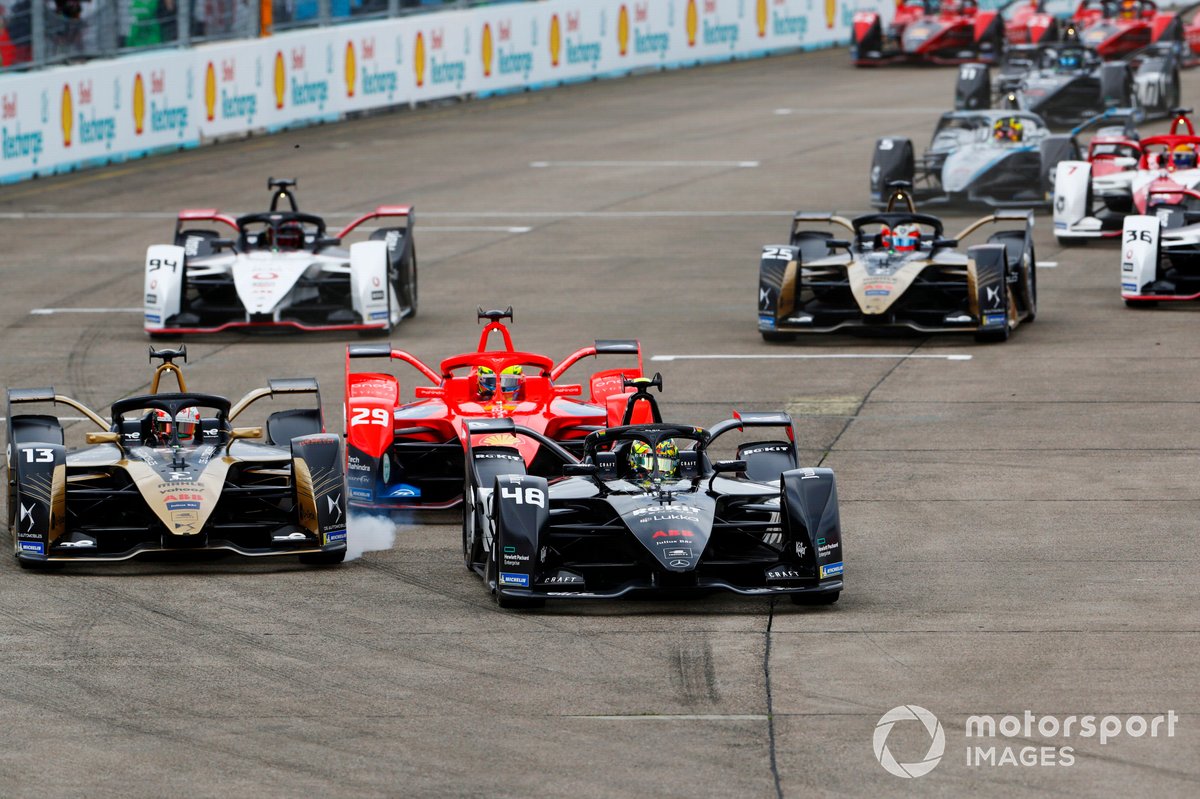 Mortara was then clear of having to defend and could focus on sipping his energy to reach the finish.

Vergne held on from the advances of Vandoorne to collect second place, the Belgian surprised to finish third having dropped to 12th on the opening lap.

However, Vandoorne enacted an excellent recovery, opting for a similarly late attack mode strategy to Mortara to carve through the pack.

Lotterer completed the first of his two home races in fourth, having briefly led while Mortara dropped back after claiming attack mode, as the Porsches showed good pace in the initial stages but got sucked into their rivals' pace during the cut and thrust of the race.

Mitch Evans focused on underconsuming in the early stages to allow him to attack late on, and that yielded dividends as the Jaguar driver rose to fifth place - clearing Pascal Wehrlein late on to close in on Lotterer.

Wehrlein nearly found himself prey to another Jaguar, with Sam Bird's similarly late charge close to paying off, while Antonio Felix da Costa dropped like a stone in the final stages to finish eighth.

Da Costa had been among those in the battle for the lead, as he and Vergne swapped positions frequently throughout the race to ensure their respective attack mode activations were effective, but the Portuguese driver failed to keep pace at the end.

He was just over a tenth clear of Sims by the end, as the Mahindra driver struggled to keep on terms with his rivals in the energy consumption stakes. Sims just pipped Nyck de Vries at the line, as the Mercedes driver once again finished 10th.