Ryan Tveter completed the podium for Trident ahead of Nirei Fukuzumi, who shot up the order with a series of dramatic moves late on.

At the start, Alesi leapt off the line from second and passed polesitter Julien Falchero on the run to La Source, getting into the apex of the hairpin on the inside line to seal the lead.

In the pack behind Russell got a much better start than Fukuzumi from eighth on the grid but got shuffled down to ninth over the first lap. 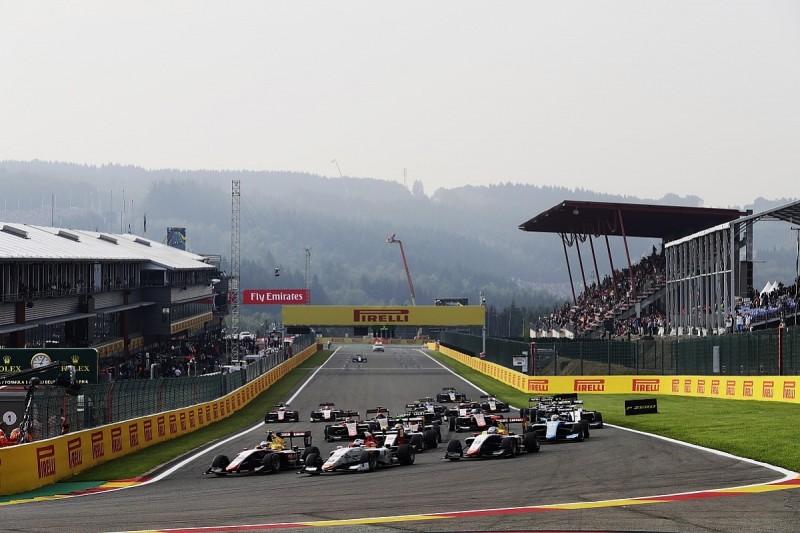 As Alesi consolidated his lead up front, Aitken, who had made a great getaway to move up to fifth from seventh after finishing second in race one, clashed with Boccolacci on the approach to Les Combes.

ART Grand Prix driver Aitken had just got ahead of the Trident racer when he appeared to move back to the right, touching Boccolacci's front wing, which broke, and giving Aitken a puncture.

He climbed out of the car after touring slowly back to the pits - although he did later rejoin - but was handed a 10-second penalty for causing the incident.

Aitken's drama aided Russell's charge, which had already started well as he got back past Kevin Jorg on lap two and then made successful moves on Arjun Maini and Niko Kari.

Mercedes F1 junior Russell set a blistering pace to close in on the podium positions and dispatched Falchero at the inside of Les Combe on lap seven of 13 while both used DRS.

He then hunted down and passed Tveter for second place - going around the outside of Les Combes to seal the position.

By this stage, with four laps to go, Alesi was 2.8s clear in the lead and although Russell chipped away at the gap the French driver held on to win by 3.3s.

Fukuzumi recovered from his slow start to rise to fourth with several bold moves - including one on Kari where he had two wheels on the grass going up the Kemmel Straight, keeping his foot on the gas to seal the place.

Falchero came home fifth after losing out to McLaren-Honda junior Fukuzumi in a drag up to Les Combes late on, while Kari was given a 5s time penalty that dropped the Red Bull driver to ninth in the final standings.

Maini ended up sixth ahead of Anthoine Hubert - another charging ART driver who climbed from 19th on the grid after retiring from race one with a blocked radiator.

Jorg took the final point in eighth as Raoul Hyman rounded out the top 10.