McLaren-Honda protege Lando Norris took his second win of the Formula 3 European Championship round at Spa to slash the points gap of series leader Maximilian Gunther, who crashed out

Norris started from fourth on the grid after losing his pole position due to a penalty for his second-race incident, with Callum Ilott moving up onto pole position.

But Ilott was powerless to prevent Prema Powerteam stablemates Guan Yu Zhou and Gunther, together with the Carlin car of Norris, from slipstreaming past on the run to Les Combes on the opening lap.

Norris wasted little time in passing Gunther, towing past his rival along the Kemmel straight on early on to slot into second behind Zhou.

Ilott then also passed Gunther for third, and it was Jake Hughes's turn to mount the next passing bid.

Hughes ducked out of Gunther's slipstream exiting Raidillion on the fourth lap, the Hitech GP driver moving to the left.

But Gunther appeared to misjudge the closing speed of Hughes and moved to the left too late to defend, contact was made and Gunther smashed into the barrier on the left with both drivers out of the race.

The incident was very quickly cleared after one lap behind the safety car, and Norris instantly towed past Zhou into the lead. 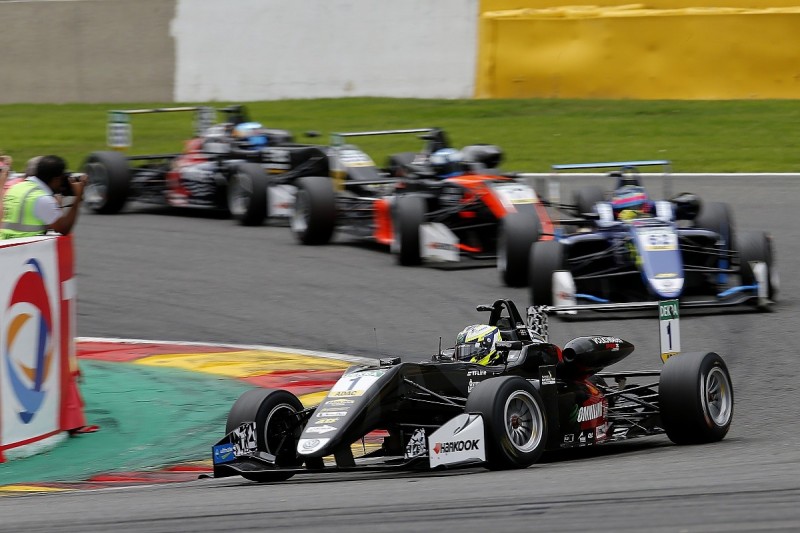 Attentions now turned to Joel Eriksson, the Motopark-run BMW junior on superb form, just as he was in race two.

From 10th on the grid, Eriksson picked his way through the pack, before passing Zhou and then Ilott to move into second with four and a half laps remaining.

Norris's lead at this stage was around 2.5 seconds, but Eriksson could make little impression and the 2016 McLaren Autosport BRDC Award winner crossed the line 2.393s in front.

"The only thing I could do to make up for race two is win today, and obviously I did that," said Norris.

"It was a real fun race - I didn't think it was a necessarily bad thing starting from fourth.

"My start was good, and that's been another good thing from this weekend."

Zhou repassed Ilott - who had slipped past him in the middle of the race - on the final lap, the Chinese Ferrari junior completing the podium as the Prema cars suffered from rear-tyre degradation.

Jehan Daruvala was fifth for Carlin, while his team-mate Ferdinand Habsburg and Hitech GP's Ralf Aron had a terrific wheelbanging battle for sixth, in which race-two winner Habsburg prevailed.

This brought Harrison Newey and Mick Schumacher into their wheeltracks, with Prema driver Schumacher passing the Van Amersfoort Racing-run Brit on the final lap for eighth.

Another VAR driver, Joey Mawson, fended off a last-lap attack from Nikita Mazepin to take the final point.