McLaren-Honda protege Lando Norris earned pole position for the first race of the Formula 3 European Championship round at Spa, heading a British 1-2-3

Norris and his Carlin Dallara-Volkswagen headed Callum Ilott by 0.225 seconds to complete a clean sweep of the sessions held so far.

Seventeen-year-old Norris was quickest in both free practice sessions, which were both held on a wet track.

He sat out almost all the second session as Carlin elected to save wet-weather tyres, then grabbed top spot with a single flying lap right at the end.

With Tuesday's test also taking place in the wet, qualifying was the first dry running at Spa with the new-for-2017 Dallara aero.

"We'd never driven here with the new package on the F3 car," pointed out Norris, who set two laps good enough for pole.

"It was difficult, because the track anyway is quite harsh on tyres, so you knew the times wouldn't be done on lap seven or eight.

"But it was tough to go out and nail it at the start when the tyres were at their best.

"I got a good lap, with no slipstream, but I think there's a bit to find because I improved my driving a lot." 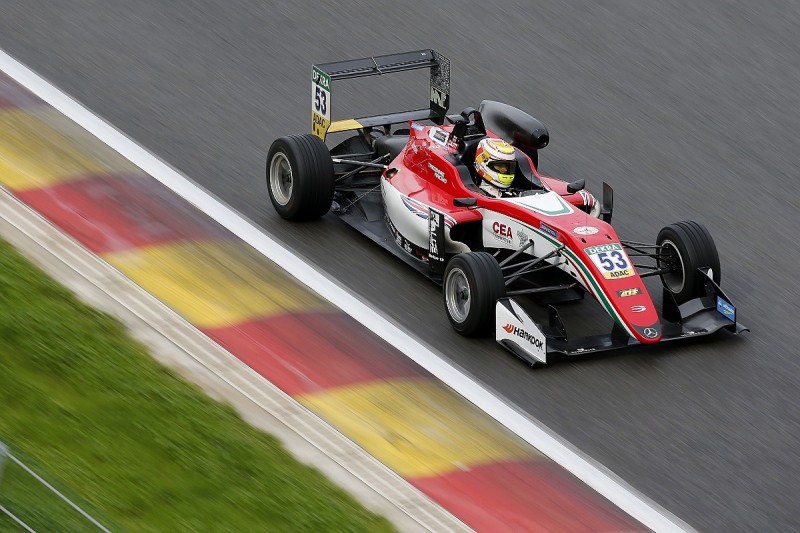 Ilott's lap was good enough to plant his Prema Powerteam Dallara-Mercedes on the front row in the face of a late challenge from Jake Hughes.

Hughes's Hitech GP machine was especially quick in the middle sector and Hughes went purple there on the final lap, only to lose time in the last part of the course.

Joining Hughes on the second row will be the Prema car of championship leader Maximilian Gunther.

Nikita Mazepin, who was quick at Spa in 2016, kept up his form on the Belgian circuit to put his Hitech car fifth, with Prema's Ferrari junior Guan Yu Zhou next up.

Jehan Daruvala will start from seventh on the grid for Carlin, with Hitech's Ralf Aron alongside him.

It was another miserable qualifying session for second-in-championship Joel Eriksson.

The Swede led the Motopark attack but was down in 12th place as his disappointing mid-season run continued at the circuit where he took his first F3 win last year.