Trident GP3 driver Dorian Boccolacci has been handed a post-feature race penalty at Silverstone for causing a collision with Arden International's Niko Kari, but ended up with race two pole

Boccolacci and Kari were fighting over fourth place late in Saturday's race at the British Grand Prix venue, which was won by Mercedes Formula 1 junior George Russell, when they came together.

The stewards gave Boccolacci a five-second time penalty, which drops him from fifth to eighth.

He will start Sunday's sprint race from reverse-grid pole as a result.

It is the second weekend in succession that Boccolacci has been given a penalty.

He lost three places after qualifying at Silverstone for crashing over the rear of Saturday's third place finisher Alessio Lorandi on the final lap of race two at the Red Bull Ring a week ago. 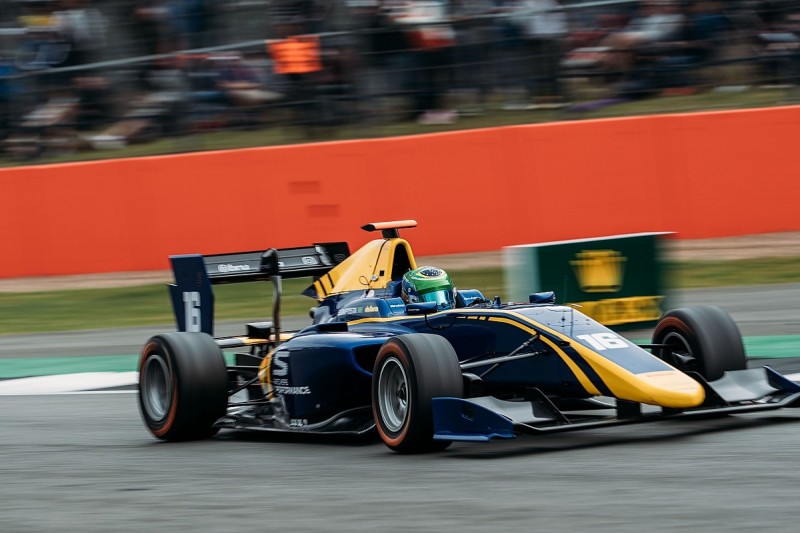 DAMS driver Bruno Baptista was also given a post race penalty after he was found to have "infringed the rules surrounding the virtual safety car", according to a GP3 statement.

The VSC had been deployed to allow the British marshals the chance to clear Ryan Tveter's stricken car towards the end of the 20-lap race.

Baptista was handed a drive-through penalty for his infraction, which the stewards converted into a 20s penalty that drops him from 12th to 15th in the final race one standings.

Behind Boccolacci on the grid for race two will be his Trident team-mate Giuliano Alesi, Arjun Maini, Kari, Jack Aitken and Lorandi.

Anthoine Hubert, who finished second in the feature event after a race long scrap with Russell, will start seventh, with the Briton in eighth.