Ferrari Formula 1 academy driver Giuliano Alesi won the second GP3 race at Silverstone ahead of Jack Aitken, with the top four covered by just 1.8-seconds at the flag

Arden's Niko Kari claimed his first GP3 podium finish in third and he held off race one winner George Russell in the closing stages.

At the start, where Alesi, son of ex-Ferrari F1 racer Jean inherited an effective pole as his Trident team-mate Dorian Boccolacci was not able to take up his grid spot, he made a good getaway to lead into Turn 1.

Behind, Aitken shot forward from a net fourth on the grid and went straight by the slow-starting Alessio Lorandi before seizing second with a decisive move on Arjun Maini under braking for Village.

Alesi set about pulling a gap at the front but he could not shake off Aitken, who looked as if he was shaping up for a move.

But before he could, the safety car was deployed when an incident involving Steijn Schothorst and Julien Falchero left them both in the gravel, with the latter's front left suspension broken on his Campos Racing car.

The safety car came in at the start of lap seven of 15 and Alesi nailed the restart, pulling clear of Aitken as the pack charged back up to racing speed.

Behind them, Russell had climbed from eighth, effectively seventh, on the grid to run fifth before the safety car and he then pressured Maini for fourth.

The Mercedes F1 junior driver closed using DRS on lap nine and sold Maini a dummy as they approached Stowe, feinting to the outside before quickly sealing the move by nipping up the inside into the fast right hander.

Russell then closed rapidly on Kari, who in turn had stayed with Aitken and Alesi, putting in fastest sectors at ease to cut the gap.

With three laps remaining the stage was set for a grandstand finish with the top four covered by just under two seconds.

Aitken used all his DRS allowances to close in on Alesi but the Frenchman held on, taking his first GP3 win one week after claiming his maiden podium in the category in race two at the Red Bull Ring. 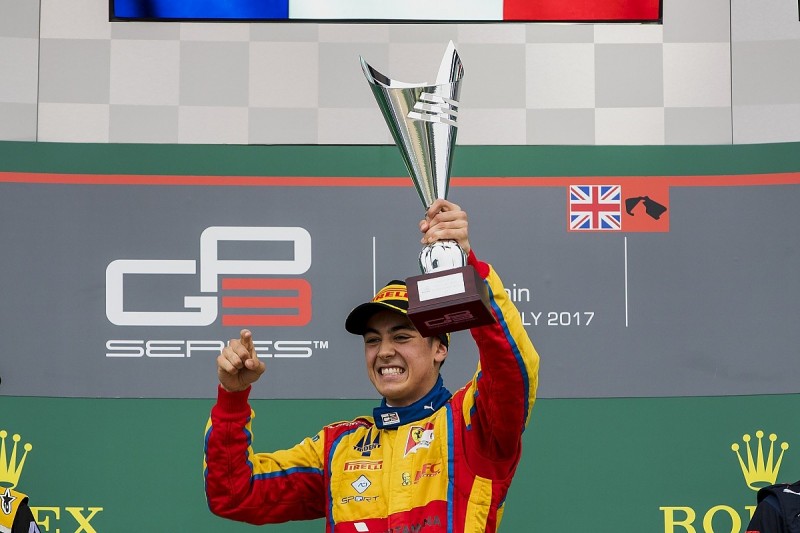 Kari, who, like Aitken, was without DRS on the final tour, rebuffed a late attack from Russell at Stowe to seal third.

Maini led home his Jenzer Motorsport team-mate Lorandi, who was cleared by the stewards of causing contact with Anthoine Hubert in the Arena section on lap ten, in fifth and sixth.

Kevin Joerg was seventh ahead of Hubert and Santino Ferrucci, who was another driver that survived a stewards' investigation - for appearing to force Leonardo Pulcini off the track at the exit of Woodcote - and the DAMS driver finished ninth.

Marcos Siebert rounded out the top 10 for Campos, with Pulcini 12th.

Former championship leader Nirei Fukuzumi ended up 16th and last after being handed a 10s penalty for overtaking under the safety car.