Poleman Ralf Aron led 36 of the 42 laps, but the Estonian's challenge crumbled in the final moments as he tumbled to fifth.

Norris started his Carlin Dallara-Volkswagen from fourth on the grid and lost no positions at the start, but his bid to prise third place away from championship leader Maximilian Gunther failed and Norris was demoted to fifth by Pedro Piquet.

McLaren Autosport BRDC Award winner Norris squeezed down the inside of Van Amersfoort Racing driverPiquet at the Dutzendteich hairpin, the last corner on the circuit, on the third tour before hunting down Gunther.

The race stabilised, with Aron holding a one-second advantage over Hitech GP team-mate Hughes, who had Gunther, Norris and Jehan Daruvala - who had passed Piquet - close behind.

But on lap 19 Gunther braked too deep - he reported mid-race lock-up problems - into Dutzdendteich, and Norris was able to slip up the inside and complete the move to take third into Turn 1.

It took only a couple of laps for Norris to zap Hughes into the Turn 1 hairpin, and now he had a 1.6s gap to make up to Aron.

At first the interval came down in increments, but with 13 laps remaining Norris was right with Aron.

There was a flurry of passing bids before Norris took a breather, and then came another attack with six laps remaining. 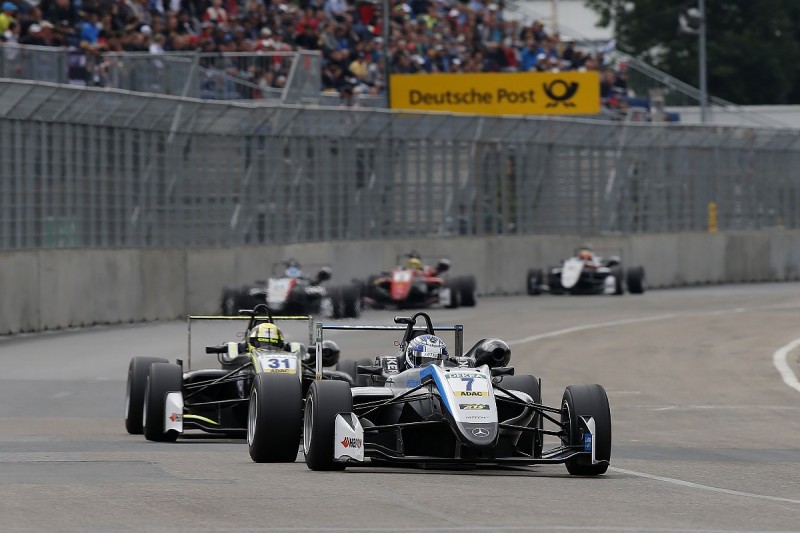 Norris tried the outside line at Turn 1, then tried an audacious bid at the chicane, which caused Aron to make an awkward exit, allowing Norris alongside on the run to Dutzendteich.

Now Norris was in front, but next time around Aron tried a bid to immediately reclaim the lead, only to lock up at Dutzendteich, allowing Hughes into second.

One lap later, Gunther drew his Prema Powerteam car alongside Aron on the run to Turn 1, and Aron's defence of the inside line caused him to sail wide of the apex, also allowing Carlin man Daruvala past.

Norris won by 1.1s from Hughes after a breathless encounter.

"It's good to be back on the top step after not such an enjoyable run of races," said Norris.

"It's not the easiest track to overtake on, especially if someone is defending well.

"But I had some good battles, particularly with Ralf."

Piquet slipped back from the leading quintet but held off VAR team-mate Harrison Newey for sixth, with Prema's Guan Yu Zhou also close at hand.

Joel Eriksson and Callum Ilott didn't make their anticipated climbs up the order, but they had a terrific scrap, Ilott moving ahead with four laps remaining to claim ninth.