From second on the grid, Daruvala's Carlin Dallara-Volkswagen got the jump on the polesitting Prema Powerteam Dallara-Mercedes of Gunther, who also looked likely to lose second to Ralf Aron.

But Gunther got a better exit from the Turn 1 hairpin and was able to cling on to second place.

Daruvala had a one-second advantage when a full-course yellow was called on lap six, after a collision between Mick Schumacher and Pedro Piquet exiting Turn 1 resulted in Schumacher pulling off with a deranged right-rear corner.

Gunther was much closer when the race went green, until several laps later there was another FCY, after Tadasuke Makino ran into Harrison Newey at Turn 1 and then careered into the runoff, making light contact with the barrier.

After this there were 24 laps of racing remaining and, although Gunther often got to within half a second and made the occasional feint on Daruvala, he never got into position to make a move.

The Mumbai teenager therefore took the flag 0.4 seconds in front to break his F3 duck.

"I had a good reaction at the start and got Maxi," said Daruvala.

"The first laps were pretty good and I had a decent gap, but I was a bit safe at the first full-course yellow and Maxi caught me.

"The car was great after the FCY and I pretty much controlled it from there; I was under big pressure but I just tried to get good exits and not make any mistakes." 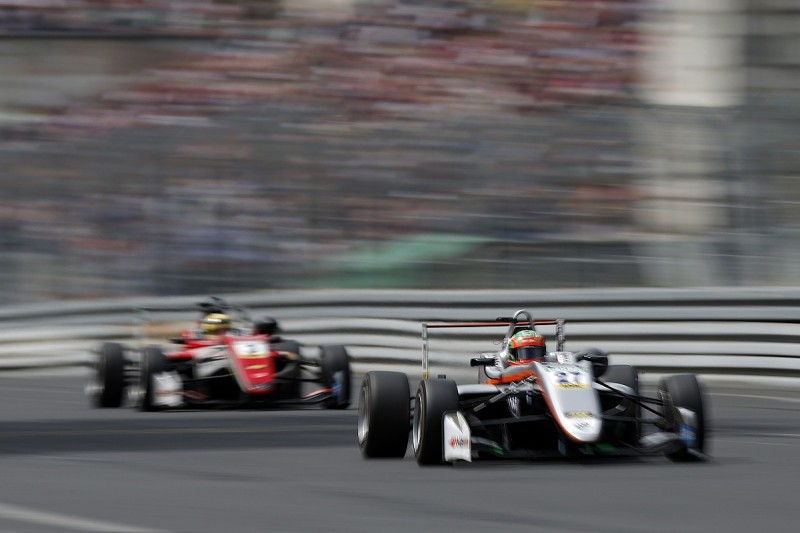 Attention focused more on the battle behind, with Aron fending off Hitech GP team-mate Jake Hughes once Hughes had got past Ferdinand Habsburg.

Eventually Lando Norris joined this group, the McLaren-Honda protege having dropped from sixth to seventh at the start.

Norris pulled off a move on Hughes at Turn 1 with 13 laps remaining to take fourth, but for a while his efforts to pass Aron made him vulnerable to pressure from Hughes.

Eventually Norris claimed the final podium spot at Turn 1 with three laps to go, the Carlin man heading Aron and Hughes at the flag.

Motopark pair David Beckmann and Joel Eriksson, the Swede having fought through from 10th on the grid, also joined this group, with Beckmann leading his title-contending team-mate home for sixth.

Ilott lost several places from ninth on the grid in the early jostling, but made steady progress back through the order before audaciously zapping both Nikita Mazepin and Guan Yu Zhou with two laps to go.