The Estonian F3 rookie soaked up immense pressure from Alex Palou throughout the race, which took place in slippery conditions, but with most of the field on slick tyres from the start.

Enaam Ahmed beat poleman Vips away at the start, but the Motopark driver hung on around the outside of Turn 1 to claim the lead on a circuit that was damp after pre-race showers.

Palou also passed Hitech GP team-mate Ahmed on the opening lap to take second, and Ahmed had to survive a second-lap place-swapping battle with Jehan Daruvala to hang on to third.

Daruvala attacked Ahmed again on the fourth tour, sweeping around the outside of the fast right-hand kinks towards the end of the lap to take third, while Prema Powerteam's Mick Schumacher then further deposed Ahmed at the left-handed Turn 15.

Schumacher was challenging Daruvala's Carlin car for third when the Indian locked up at Turn 8 on the eighth lap, betraying a bent right-front pushrod from kerb damage that sent him to the pits and retirement.

Now Schumacher set off after the leading duo, and with eight laps remaining Vips, Palou and Schumacher were all close.

The return of light showers in the second half of the race further added to Vips's challenge in having to judge the conditions as the first on the road, but he held firm to defeat Palou by 0.521 seconds.

"It seemed honestly like one of the hardest races I've ever been in," said a relieved Vips. 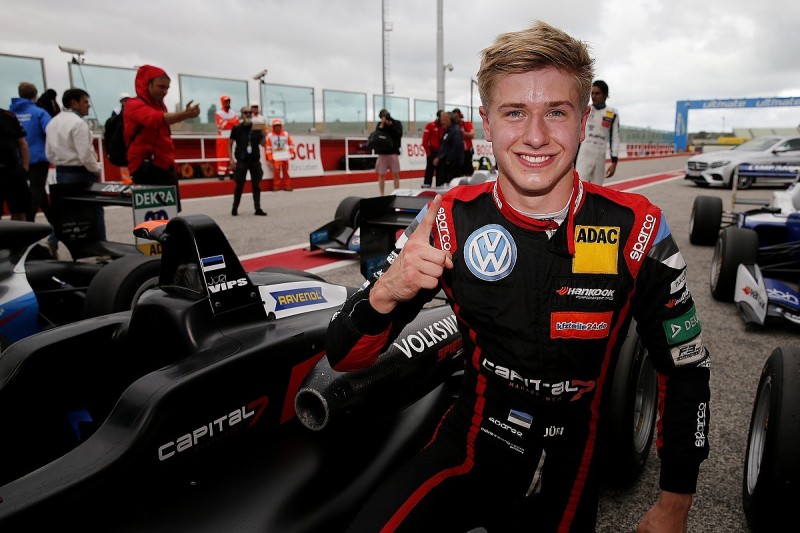 "The showers completely messed up the grip and you don't have any references, and the guys behind could see what I was doing, so it was a miracle that I won the race.

"There were two, three or even four moments every lap - it's never easy to win in F3, but these conditions were something else!"

Schumacher fell away slightly in third, and had fastest lap setter Ahmed catching him as the chequered flag flew, but Ahmed was penalised five seconds for breaching track limits, dropping him to sixth in the results.

Dan Ticktum did a cracking job from 11th on the grid to bring his Motopark car through to fifth on the road, the Red Bull Junior passing Prema driver Ralf Aron for what became fourth spot with Ahmed's penalty with seven laps remaining.

That boosted Ticktum's championship advantage, as closest title rival Marcus Armstrong made a very slow start and spent his whole race outside the points.

Vips has now moved up to second in the table, 18 points behind team-mate Ticktum. Behind Aron, Ferdinand Habsburg (Carlin) held on for seventh in the face of a long-time attack from Robert Shwartzman (Prema).

Just behind them it was another close finish, with Sacha Fenestraz of Carlin just beating Motopark runner Fabio Scherer to ninth.

A post-race time penalty for Shwartzman, for passing Fenestraz outside track limits, bumped Fenestraz up to eighth and Shwartzman down to ninth.