Zhou locked up in wet conditions on the first lap of action after the final restart, collecting fourth-placed Armstrong and taking the two Prema Powerteam cars out of the race.

Zhou has been given a five-place grid penalty for the first race of the next round at the Nurburgring by the stewards for his part in the incident.

Armstrong has now fallen to 32 points behind championship leader Dan Ticktum in third place, while Zhou, who has been a title contender for much of the season before a spate of recent incidents that were mostly not his fault, is now 68 adrift in seventh.

When the green flags flew Armstrong was lying second, having led earlier before being passed by Prema team-mate Ralf Aron.

But Juri Vips and Ferdinand Habsburg jumped Armstrong immediately at the restart, and then he was removed from the race by Zhou.

"The vision the whole race was pretty difficult, and I got a huge hit from Enaam Ahmed in the first part of the race - luckily I was still going," Zhou told Autosport.

"At the restart there were so many cars, and some were going to my outside [into Turn 4].

"I decided to take the inside line and I locked up - I'm sorry for the team for what happened, but everything is fine with them." 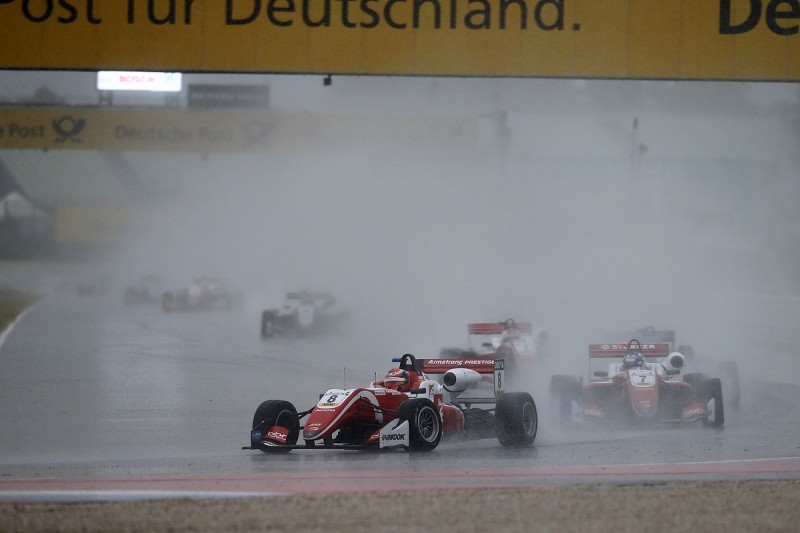 Armstrong said: "I'm more disappointed by the fact that we weren't fast enough to dominate - I didn't have the same grip as Ralf.

"In terms of the accident, I completely understand it because these things happen, especially in these conditions.

"Joe [Zhou] means well, so there are no problems at all."

This is the second consecutive weekend in which Armstrong has been taken out of the final race by a team-mate, following a first-lap clash with Mick Schumacher at Silverstone that damaged his suspension.

When asked whether it was frustrating, Armstrong said: "Absolutely, but we'll survive. We'll always come back - it's in our nature."

Armstrong attributed his poor start in race two, which dropped him to a position outside the points from which he never recovered, to his judgement of the slippery conditions.

"I was too conservative - I thought it was a lot slippier than it was," he said.

"In retrospect it's very very painful - hey, it happens, but it won't happen again."