Masters of F3 at Zandvoort set for entry resurgence in 2015

A straw poll by AUTOSPORT of Formula 3 European Championship teams, which raced at the Dutch circuit last weekend, indicates a likely entry in the low to mid-twenties.

Last year the race suffered because of a European round the following weekend at Moscow Raceway - with insufficient time to truck the cars from the Netherlands to Russia, the Masters was run for older-spec cars from the German and British championships.

Only 11 cars turned up, and the race was won by guesting European championship star Max Verstappen in a German F3 Dallara-Volkswagen run by Motopark.

This year the race has been moved later in the calendar to September 18-20; although the following weekend's European round at the Nurburgring looks likely to account for some of the runners, a good proportion of the 34-car field should be present.

Carlin boss Trevor Carlin and Motopark chief Timo Rumpfkeil said their teams are likely to field three or four cars each, with indications of a similar number from Mucke Motorsport.

Local team Van Amersfoort Racing is looking set to enter its three cars, while Double R Racing and T-Sport (which will give a debut to the new ThreeBond engine) have pledged two apiece and Fortec Motorsport is keen to run around three.

Team West-Tec does not yet know whether it will appear at Zandvoort. Signature and top squad Prema Powerteam have both said they are unlikely to be at the event.

The race will this year be run over a Macau Grand Prix-style format, with a qualification race on the Saturday and the final on the Sunday.

In turn, Macau's qualification rules have been changed so that a driver must have started at least two F3 races during the current calendar year rather than just one, making the Masters a suitable event to gain eligibility for Macau.

THE MASTERS ROLL OF HONOUR

In its 24-year history, the Masters has been won by drivers bound for Formula 1 13 times, with current Williams grand prix driver Valtteri Bottas and present European F3 title contender Felix Rosenqvist its only double winners. 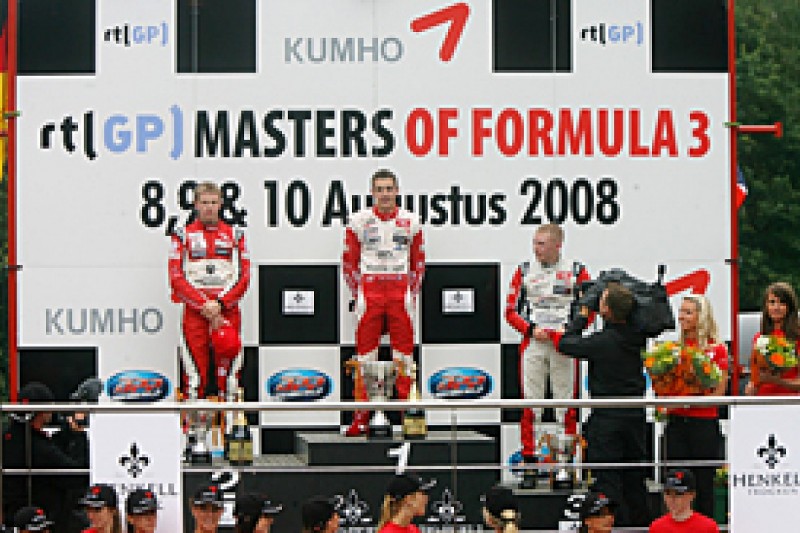 Jules Bianchi, Nico Hulkenberg and Jon Lancaster are pictured on the 2008 podium.

Masters of F3 debut in September for new ThreeBond engine