The Swede, fresh from his maiden Formula E pole position last weekend, looked stunning on the circuit and his Theodore Racing-backed Prema Powerteam Dallara-Mercedes ended the session 0.412 seconds ahead of the closest opposition.

Practice, scheduled for 40 minutes, was red-flagged 13 minutes in after Ferdinand Habsburg went into Fisherman's Bend too hot and understeered his Fortec Motorsport car into the tyre wall.

The Austrian, who is making his competition debut in FIA-spec F3 this weekend, was taken to hospital for a precautionary check-up.

Unfortunately, the car came to rest directly under a pedestrian bridge, restricting manoeuvre room for the recovery crane, and with the left-front corner wedged under the barrier.

That meant a lengthy 16-minute stoppage, although the session was extended by five minutes, allowing an uninterrupted 16-minute burst at the end.

While Rosenqvist had an unimpeded run at the front of the pack, Callum Ilott wriggled out of the traffic to get two clear laps and propel his Van Amersfoort Racing car to second place.

"There was no rhythm but I just tried to get a lap in," said the Briton.

"The track in some places is a bit dirty but I just tried to get used to it, sorting out what's better and what's not." 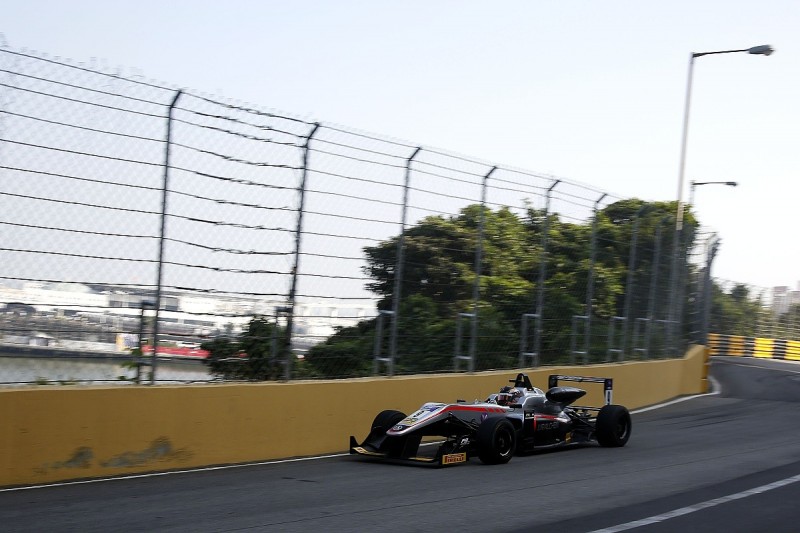 DTM driver Daniel Juncadella got into the groove swiftly to take fourth with his Hitech GP machine, while Formula Renault Eurocup champion Lando Norris was the star Macau rookie as he topped Carlin's quartet of Dallara-Volkswagens.

Norris, who celebrated his 17th birthday only a few days ago, was committed right from the start, and was the last man to lap within a second of Rosenqvist's best.

Next up were two more Carlin drivers, with Jake Hughes taking sixth place from Antonio Felix da Costa, Macau newcomer Hughes somehow managing to keep it out of the barriers after a massive moment at Fisherman's.

Of the other drivers who didn't finish the session, Nick Cassidy suffered brake problems before his car shut down and he parked on the start-finish straight with a few minutes remaining, while Jann Mardenborough had to pit because his engine cover was coming loose, to rather detrimental effect on his straightline speed.

Theodore Racing could take stake in Prema team for 2017