Macau Grand Prix drivers's tyre allowance will increase to five sets of slicks for the 2016 race weekend, the first since Pirelli won the control-tyre contract for the event

The decision was taken in the days immediately before the event began.

In previous years competitors were given just three and a half sets per weekend.

Yokohama had held the tyre deal since 1983, when Macau switched to Formula 3 regulations, before Pirelli was awarded the contract for 2016, the first year under the new FIA F3 World Cup title.

Worries from some teams during pre-event running on the Pirelli rubber led to the decision to raise the number of tyres allowed, especially as temperatures in European testing were below 15 degrees, some way below the humid Macau.

"It's hard to say after just FP1, but I think there's definitely more degradation and it's a different feeling - it's a big change.

"We all took the Yokohamas for granted, so this is a big challenge for teams to adapt to, and also we haven't had the chance to test them in Macau weather conditions.'

Rosenqvist believes the decision to allow more tyres is the correct one.

"I think it's a good thing,' said the Swede.

"The tyres go off so quickly that in the end we would spend our whole time sliding around the whole track.

"It's also much fairer for the rookies who are here."

As was the case in the Yokohama era, Macau does not include any expense for teams on tyres, which are supplied to them from free. 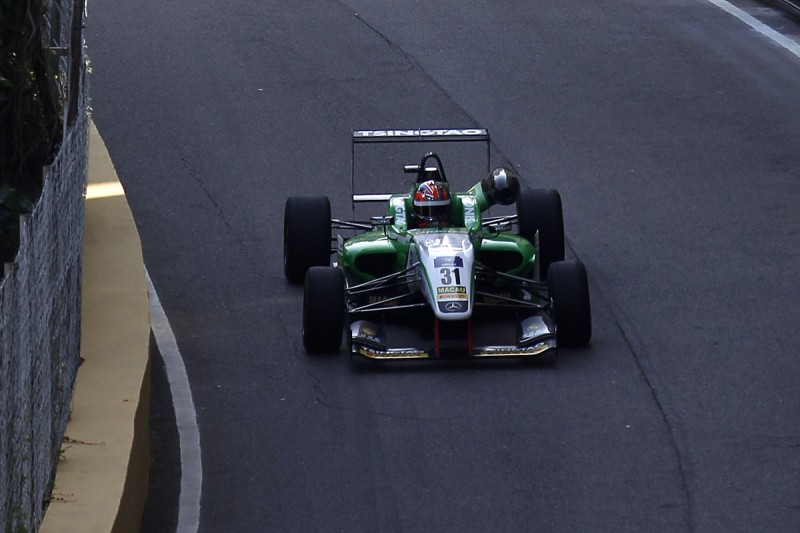 F3 newcomer Dan Ticktum and Japanese F3 ace Tadasuke Makino have both been reported to the stewards for crossing the pit-exit line during free practice.

Ticktum ended the session in 11th place, while Makino - who is tipped to contest the F3 European Championship in 2017 - finished it being removed from the barriers at Lisboa by a crane.