The 18-year-old Briton was on superb form in his Van Amersfoort Racing Dallara-Mercedes, setting no fewer than four laps quicker than anyone else's best and finally heading the field by half a second.

Ilott, who crashed four times on his rookie visit to Macau in 2015, said: "I've learnt from last year I guess - well, I hope...

"At the moment it's been consistently good - there were still some close calls but I've got control, although Q2 is when everyone goes for it.

"I used my tyres from FP1 and they seem to be working well - they started going off towards the end but I still got a good time in [Ilott's best was on his final lap].

"That lap was with a tow, but what I was really pleased about was doing four or five laps in a row within three tenths." 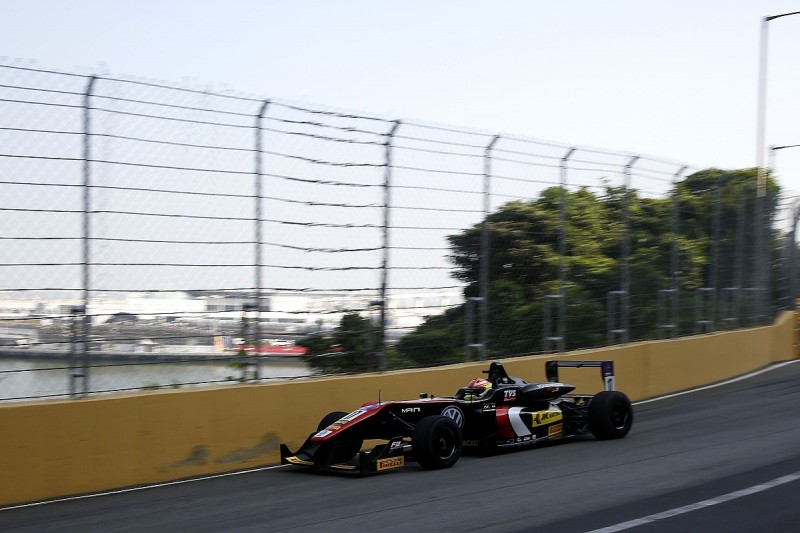 "We made another step," said the GP3-racing Indian, who had just one test day before Macau. "The car was really good in the beginning and I'm driving a lot better than yesterday.

"I just need to put together the final sector, but the more you do it the easier it gets."

Kenta Yamashita remained among the frontrunners by taking third in his Tomei-engined T-Sport car, setting his time on his final lap, as did Felix Rosenqvist, the two-time winner finishing up fourth in his Prema Powerteam machine.

Maximilian Gunther showed that he is making progress on his first visit to Macau by taking ninth on his final lap, with the German's Prema team-mate Nick Cassidy rounding out the top 10.

The session ran stoppage-free until it was terminated three minutes from the end due to a two-car crash at Police bend.

Ye Hong Li lost control and smacked the barriers on the exit, and the yellow flags were just being unfurled to warn of the incident when Guan Yu Zhou came round the narrow corner and smashed into the back of Ye's car.

Both drivers hopped out unscathed, laughing and joking about the crash as they eschewed the waiting ambulance to walk back along the reservoir to the paddock.

Dan Ticktum's session ended at the midway point when he hit the wall, although he managed to get his car back to the pits.