Russell drove what he described as "one of the best laps of my life", as spots of rain fell following two red-flag stoppages, to deny Ilott, who was on pole until three minutes from the end of the session.

Macau rookie Russell then lowered the time further on his final lap in his Hitech GP Dallara-Mercedes.

"After the second red flag I went out and at Lisboa there was a slippery-surface flag," he said.

"I didn't know what it was for, but as I went over the mountain I saw there was some rain - but I realised that the grip was still there.

"I had Jann Mardenborough in front of me, got a bit cheeky and went for a slipstream, and that lap put me P1.

"I thought surely I can't improve on that, but I knew that even if I crashed P1 was probably there and I pulled the lap out - the middle sector was absolutely awesome."

Ilott set his best lap on old tyres fitted to his Van Amersfoort Racing machine at the start of the session, and felt that his disadvantageous position in the second half of the pitlane prevented what would have been an improvement on new rubber after the red flags, while Russell was able to squeeze one more lap out.

The same applied to Carlin duo Antonio Felix da Costa and Sergio Sette Camara, who finished third and fourth, both having set their times in the first half of the session on just two new Pirellis each.

"But that doesn't mean George's job is any less," acknowledged Red Bull junior Sette Camara. "He did an amazing job." 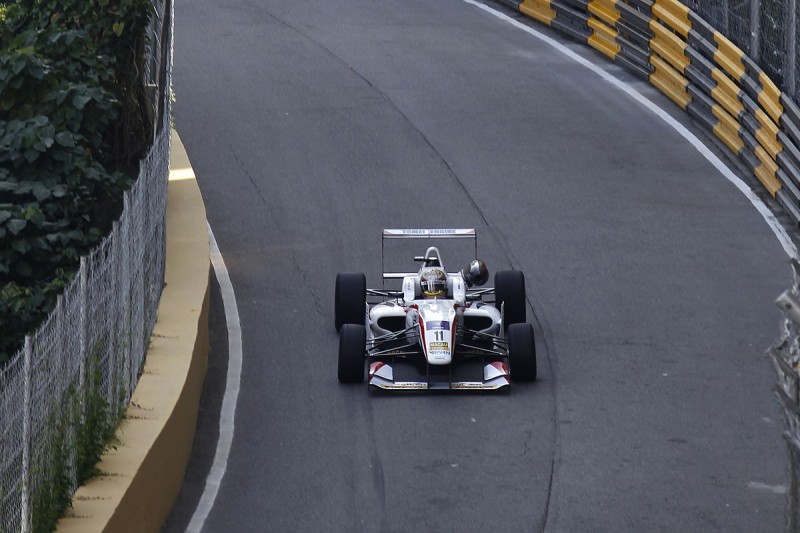 Japanese champion Kenta Yamashita continued his strong weekend in the Tomei-engined T-Sport car to take fifth on the grid, with Jake Hughes putting his Carlin entry into sixth place.

Maximilian Gunther leapfrogged his Prema Powerteam stablemates to take seventh on the grid for the qualification race, but the German caused the second red flag when he crashed heavily at R Bend.

Two-time Macau winner Felix Rosenqvist slumped to eighth on the grid in his Prema car, with Lando Norris making it all four Carlin runners in the top nine, and Prema's Nick Cassidy rounding out the top 10.

The first red flag was caused by Daiki Sasaki crashing before Maternity Bend, completing a miserable day for the B-Max team, which could not repair the heavy damage sustained in free practice to Ye Hong Li's car in time for the session.

There was a third red flag that came out as the session finished, caused by an Arjun Maini incident at Lisboa, which prevented some drivers from completing their final laps.