Alesi beat his team-mates Ryan Tveter and Kevin Jorg to the top spot, with Dorian Boccolacci just off the podium in fourth.

But Anthoine Hubert finished fifth to move up to third in the standings.

Trident's cars were already 1-2-3-4 on the grid, and polesitter Tveter maintained the lead off the line but locked up at Turn 1 and ran deep - edging Jorg wide.

That allowed Alesi to nip up the inside and into first, sealing the lead as he swept into the left of Turn 2.

As the pack charged into Turn 3 behind him, Leonardo Pulcini and Fukuzumi clashed, which broke the former's wing and spun the Honda F1 junior, forcing him to crawl back to the pits and retire with his right-rear punctured.

Alesi and Tveter raced clear of Jorg in third, as Boccolacci was attacked and passed by Jenzer Motorsport's Alessio Lorandi.

But on lap seven of 17, Lorandi slowed after running off the track at Turns 9 and 11, eventually stopping at Turn 1 with what looked like a suspension problem, as Steijn Schothorst also ground to a halt.

That meant the virtual safety car was deployed, but when it ended the midfield had closed up and Aitken took advantage, moving past Hubert to take fifth, as Russell climbed into the top 10 after starting last as a result of the throttle sensor issues that stopped him starting in race one. 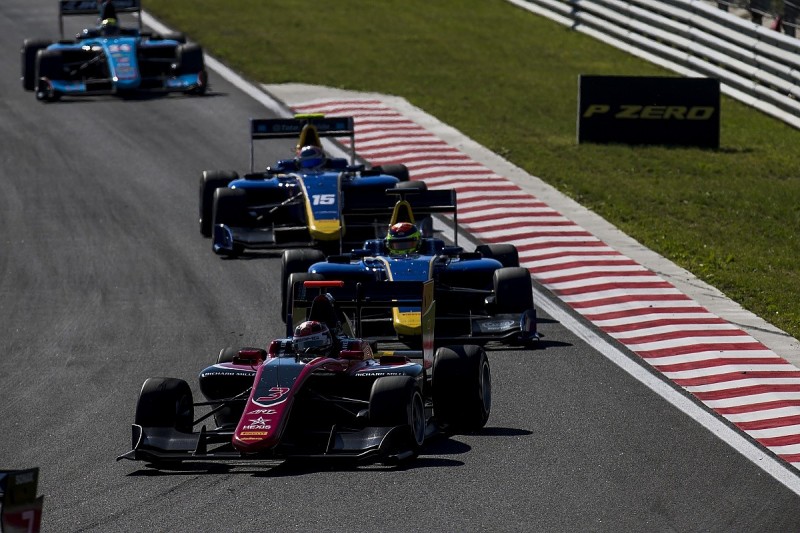 With the top three clear after a second VSC activation following Bruno Baptisa stopping on the inside of the Turn 6/7 chicane, Aitken attacked Boccolacci for fourth around the outside of the fast left of Turn 4.

The Renault F1 junior got ahead but went wide over the runoff kerbs and had to give the place back.

He attacked again after doing so and got past Boccolacci using DRS at Turn 1 but ran deep into the corner and lost out to the Frenchman, Hubert and Arden International's Niko Kari.

On lap 13, Russell, who had made it up to eighth, pressured Aitken at Turn 3.

But when his team-mate appeared to slide wide at the exit, the Mercedes F1 junior had nowhere to go and they came together.

Both lost momentum, dropped out of the points positions and pitted, with Aitken retiring with a puncture.

Up front, Alesi came home to win by 0.6 seconds after marshalling the gap to Tveter for the whole race, with Jorg a further 1.7s adrift in third.

Kari ended up sixth ahead of Raoul Hyman, Marcos Siebert and Arjun Maini, as Pulcini recovered to 10th.

The other non-finisher was Julien Falchero, who retired late on with a puncture at Turn 1.