Aitken beat his team-mates Nirei Fukuzumi and Anthoine Hubert to score his first win of the 2017 season.

The final ART driver, championship leader George Russell, could not take the start as his car ground to a halt several times on the formation lap and he could not make it back to the pits.

When the lights went out, Fukuzumi latched onto the back of Aitken, who no longer had to defend immediately to his right due to Russell's absence.

Aitken stuck to the inside line on the run to Turn 1 to stop Fukuzumi making a move and did likewise on the approach to Turn 2 to secure the lead.

In the pack behind, DAMS' Tatiana Calderon was pitched across the track heading into Turn 4 and could not get going again.

Her stricken car, combined with Russell's stopped machine and Arjun Maini pulling over at Turn 1 after making a very slow getaway, led race control to deploy the safety car.

Aitken held the lead when the race restarted on lap four of 22, but it was not long before proceedings were neutralised again when Steijn Schothorst stopped at the exit of the long right-hand Turn 5.

He had to be pushed clear by the marshals, which led to the virtual safety car being activated.

When the field was released a short while later, Aitken immediately set about pulling out an advantage over Fukuzumi. 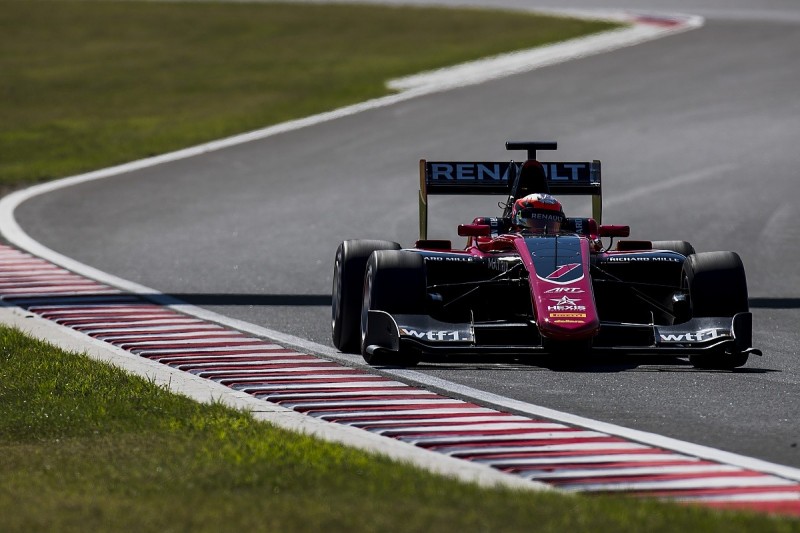 The 21-year-old set a string of fastest laps to edge clear of any DRS threat from his team-mate, who could not cut the gap.

Aitken eventually eased home to win by 4.4-seconds at the flag and is now second in the championship standings, just nine points behind Russell.

Hubert, who had started fifth, stalked and passed Dorian Boccolacci during the early stages and came home another 4.4s adrift of Fukuzumi.

Boccolacci dropped to fifth late on when Jenzer Motorsport's Alessio Lorandi attacked at Turn 1 with two laps remaining and the Italian sealed fourth place down the inside of Turn 2 as his rival locked up.

Despite losing out there, Boccolacci was able to resist his fellow Trident drivers Giuliano Alesi and Kevin Jorg in the final tours.

The final Trident racer, Ryan Tveter, was eighth, 1.1s adrift of his team-mates, as Niko Kari, who had fought Boccolacci for fourth in the first half of the race before losing out when he ran wide during an attack at Turn 1 on lap 10, finished ninth.

Bruno Baptista rounded out the top 10.

Matthieu Vaxiviere, who is making a one-off appearance for DAMS, ended up 12th despite having to start from the pitlane as a result of a penalty he received for impeding during qualifying.

Raoul Hyman committed the same offence and started 18th, and he finished 14th for Campos Racing.