Joey Mawson and Jake Hughes started on the front row, but Arden driver Mawson struggled to get away from his reversed-grid pole, falling down the order as the ART-run cars attacked.

Callum Ilott, second in the championship, attempted an ill-fated move on Mawson on lap two of 13 that failed and dropped him behind Mazepin and Hughes.

Mazepin then took Hughes for the lead on lap four and built a steady advantage, and kept his tyres in good condition for just long enough to seal his third GP3 win, although Hubert closed in at the end.

Hubert had started in sixth courtesy of his third place in the first race on Saturday, and steadily worked his way through the field with multiple moves on the Kemmel Straight.

He sat behind Ilott, his closest title rival, for a number of laps, before making a decisive move at Les Combes to take he take second.

Hughes held on for fourth, although he dropped away late-on. 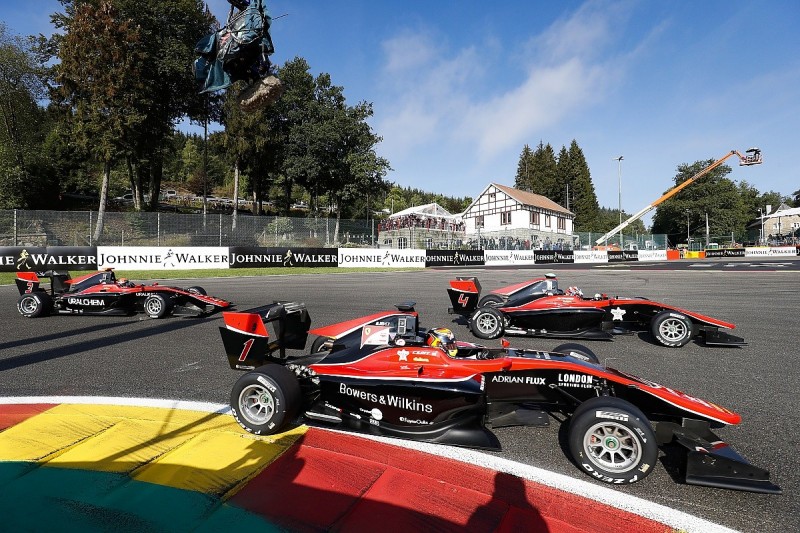 Pedro Piquet could not hold off Hubert's charge, but added fifth in race two to his fourth in race one to pick up a good haul of points for his Trident Racing team.

Giuliano Alesi completed a troublesome weekend with a drive from ninth to sixth, while GP3 debutante Richard Verschoor rose 10 places in a brilliant drive in his MP Motorsport-run car, taking 7th from 17th on the grid.

Ryan Tveter held off an oncoming pair of Jenzer Motorsport-run cars, driven by Tatiana Calderon and Juan Manuel Correa, to take the last point in eighth.

The trio crossed the line together. Mawson fell all the way out of the top 10 despite some spirited defending throughout the race, and retired after leaving the track late-on.

Leonardo Pulcini's horror weekend continued as he retired from race two, which means as he scored no points in either race his erstwhile third place in the championship disappeared.

Saturday's race one winner David Beckmann suffered a problem on the warm-up lap and failed to start the second event.