Daruvala got the difficult job done at the start, passing reversed-grid polesitter Niko Kari at the start before a pile-up at Turn 1 brought out a safety car.

When the race resumed, Daruvala managed the gap to Kari until another safety car for Simo Laaksonen's battered MP Motorsport car, but again cannoned off the final corner with a perfect restart to establish a lead out of DRS range.

The gap remained at just over two seconds for the majority of the race, with Daruvala sealing a comfortable win.

Behind, third-place starter Juri Vips took second, but his route was a lot more difficult than it appeared.

After a tricky getaway the Red Bull junior spent most of the race in fifth.

Fast-starting ART Grand Prix driver Max Fewtrell held third for the majority of the race, but was passed by Marcus Armstrong with seven laps to go and Vips repeated the move at Turn 1 in the same style one lap later.

But Vips was not done, again demonstrating Hitech's rapid race pace by diving down the inside of Ferrari junior driver Armstrong at Turn 1 in a daring move that was duly rewarded.

He then reeled in Kari in a matter of two laps and also passed him at Turn 1, scoring second to better his sixth place from Saturday. 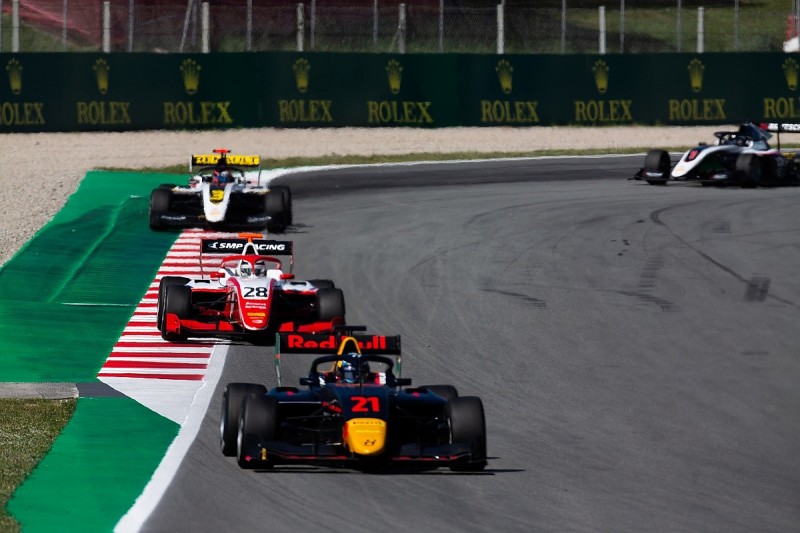 Race one winner Robert Shwartzman - another Ferrari-backed Prema driver - worked his way patiently through the field but came alive in the closing laps, stealing a position from Armstrong on the penultimate lap.

He got within a hair of displacing Kari, but ran out of time and had to settle for fourth ahead of team-mate Armstrong.

Christian Lundgaard was the top ART driver home in sixth, having finished second in the previous race after a penalty robbed him of an on-the-road win.

His ART team-mates followed, David Beckmann finishing ahead of the final point scorer Fewtrell - with both drivers finishing below their starting positions.

Red Bull-baked Yuki Tsunoda finished where he started for Jenzer in ninth, ahead of top Carlin driver Felipe Drugovich.