Aron emerged in front from a three-abreast dive into Tarzanbocht with poleman Dan Ticktum and third-placed starter Mick Schumacher.

In a near-repeat of his Race 1 start with Guan Yu Zhou, Aron got a better getaway than the polesitter and squeezed down the inside.

But Schumacher got a better launch than both and, when Aron moved left to take his line for Tarzan, he made contact with Ticktum.

The Red Bull Junior in turn clipped Schumacher, sending the German onto the dust on the brakes, from where he spun deep into the gravel trap.

With midfielders Enaam Ahmed and Jehan Daruvala also coming to grief at Tarzan - Ahmed earning a three-place grid penalty for Sunday's race - and Ben Hingeley and Ameya Vaidyanathan doing the same two corners further on at Hugenholtzbocht, the race went under safety car.

Aron got a good restart, and his Prema Powerteam Dallara-Mercedes was over a second clear of Ticktum's Motopark car after one lap of green-flag racing.

Championship leader Marcus Armstrong tried a move around the outside of Ticktum at Tarzan, then cut back on exit to move in front.

Ticktum got onto the dust, and the lost momentum allowed Zhou through at the following Gerlachbocht.

From then on it was a Prema 1-2-3 to the finish, and although Armstrong got the gap to Aron down to half a second the Estonian was never threatened as he moved to second in the championship, 4.5 points behind Ferrari junior Armstrong. 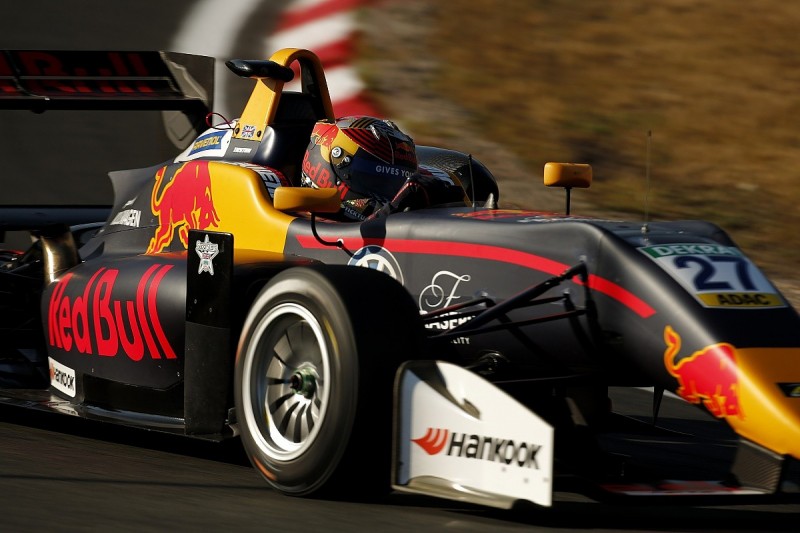 "I've had moments with Dan a number of times, and I knew that the more pressure you put on him the better for me," said Aron.

"We touched, but luckily I was able to continue, although I was a bit anxious because I thought my front was a bit weird.

"But I kept my cool and my two team-mates did a great job to get around Dan - I was happy to see that in my mirrors and for the Prema train to cross the line ahead."

"With Dan it was interesting," added Armstrong of his Ticktum move.

"It reminded me a lot of Turn 1 at the Hungaroring [where they made contact] - I learned from my mistake but he obviously didn't, and I was happy to get P2."

Ticktum's adventurous race continued when, with five laps remaining, he locked up into the chicane, allowing the Hitech GP car of Alex Palou into fourth.

Carlin's Ferdinand Habsburg was also a beneficiary, getting a double tow off Palou and Ticktum to sweep around the outside of Ticktum at Tarzan for fifth.

Robert Shwartzman (Prema) held off the Motopark machine of Juri Vips for seventh for the duration, while behind them a great little dust-up between Motopark men Fabio Scherer, Marino Sato and Jonathan Aberdein eventually fizzled out, with the trio finishing in that order.