The Prema Powerteam-run driver, known for his blistering starts, converted pole into a comfortable lead on the opening lap, and it seemed that the only thing that might stop him was a safety car.

Sure enough that materialised on the second lap, after the fast-starting Sacha Fenestraz was tipped onto two wheels at the Dutzendteich hairpin by Jonathan Aberdein and into the barriers.

But Armstrong scarpered on the back straight at the restart, and within a lap had pulled 1.2 seconds on the sister Dallara-Mercedes of Ralf Aron, the gap eventually stabilising at 3s.

Aron had no answer to Armstrong, and came under pressure at the restart from Motopark-run Red Bull junior Dan Ticktum.

Ticktum in turn had slow-starting front-row man Jehan Daruvala behind him, and the Force India protege soon grabbed third place with a clean pass into the Turn 1 hairpin. 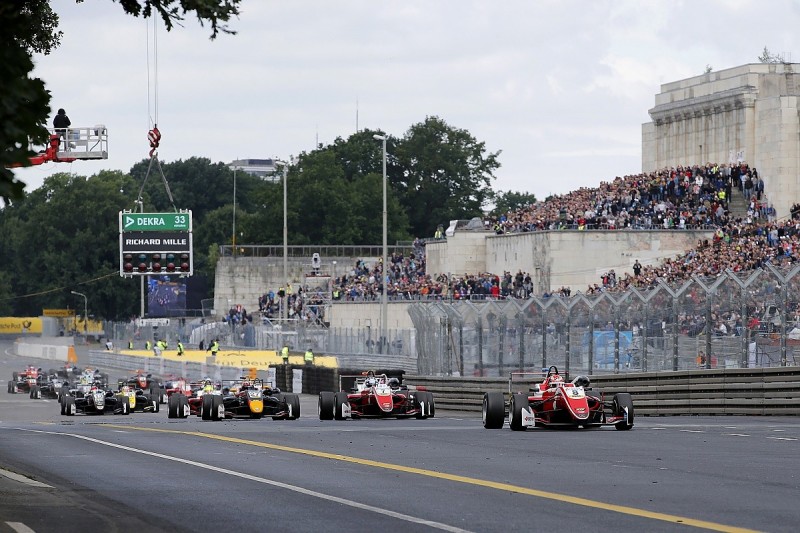 Daruvala, a race winner at the Norisring in 2017, planted his Carlin car on the gearbox of Aron, but there was no opening, while in turn Ticktum shadowed the duo from fourth.

"It was almost perfect," said Armstrong. "I've had some bad luck in the races so far, and I didn't really want to overcomplicate this one, and the best way to do that was to start from pole and do what we've been doing. We did the job perfectly."

Robert Shwartzman had plunged down the inside of everyone bar Armstrong at Turn 1 at the start before running wide and he was fifth at the restart, but soon lost the position to Prema team-mate Mick Schumacher at Dutzendteich.

Schumacher could never break away from Shwartzman, while the Motopark car of Juri Vips was similarly close to hand as the trio filled fifth down to seventh place.

Marino Sato in his Motopark car was also on the tail of this bunch, before falling away in eighth.

The top two in the championship going into the race, Enaam Ahmed and Guan Yu Zhou, advanced from the seventh row into the top 10, only for Ahmed to lose it under braking into Turn 1 and spin down the field - meaning his series lead is cut to eight points over Ticktum.

Palou also had to keep an eye on his mirrors for the Van Amersfoort Racing car of Keyvan Andres, having his best race yet, before provisionally claiming the final point.

After the race, Palou was penalised one second for passing Andres under the full-course yellow that preceded the safety car, giving the German-Iranian 10th place and his first F3 point.

Aberdein spun at Dutzendteich while seventh on the first lap after the restart, while Nikita Troitskiy's strong qualifying performance came to nothing when contact with Shwartzman on the opening lap forced him pitwards to replace a damaged front wing.