Red Bull Junior Ticktum made contact at Turn 1 with Ferrari protege Marcus Armstrong, who had made a lightning start from fifth on the grid to take the lead.

With the track slippery after rain during the morning, the left-rear tyre of Armstrong's Prema Powerteam car made contact with the right-front wing of Ticktum's Motopark machine, giving the New Zealander a puncture.

"I don't know why it was under investigation," said Ticktum, who went on to lead each of the 22 laps and now leads the championship by half a point.

"I was on my racing line, he went onto the wet part of the track and basically understeered into my front wing - there was nothing I could do.

"The front-right suspension was slightly bent, probably one of the wishbones, but with the first 10 laps on the slippery track it was more about the driver.

"I think it affected the camber, but I just decided to ignore it!"

Armstrong was unhappy with the verdict, as the race represented his second successive retirement as a consequence of first-lap contact with Ticktum.

"They cleared it before they even spoke to me - I don't agree with that decision," the reigning Italian Formula 4 champion told Autosport.

"I was clearly ahead, and for the second race in a row we've had a DNF due to his misjudgements.

"My start was mega - I think everyone else was a little bit overcautious.

"Dan didn't defend - he left enough room for me and I did the easiest overtaking manoeuvre of my career, but obviously he's driven into my rear wheel.

"I am not sure what he was doing." 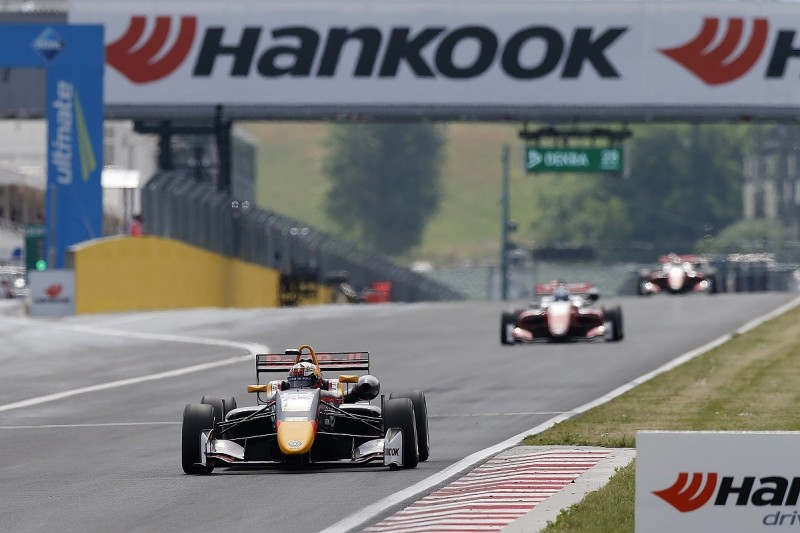 Ralf Aron claims that he did not jump the start after losing his second place in race one.

The Prema driver was notified during the race that five seconds would be added to his race time for what was deemed a jumped start, relegating him to an eventual fifth place.

"When I preloaded the car, maybe two lights were on and I had a little move," Aron said.

"But I didn't go over the box or anything, and the start itself wasn't a jumped start."

Aron explained that had he known sooner about the penalty, he would have called off his early chase of race winner Ticktum and concentrated instead on pulling out a gap on the cars behind.

"My pace was good, but unfortunately I didn't know about the penalty at the beginning," he said.

"I pushed to put pressure on Dan, and that overheated my tyres - looking back, I should have taken it easier to gain some places on the guys behind with my penalty.

"Rules are rules, but I would be OK with it if I'd moved out of my box.

"For the second weekend in a row I'm losing out on so many points because of little things."