Hughes, who won the GP3 reversed-grid race at the venue during the summer, set the overall best time of the 80 minutes in a short burst of action right at the end after the only red flag.

That lap dislodged the first-session-topping effort of Norris, who wrapped up the Formula Renault Northern European Cup at the same circuit two weeks ago.

It was the first time driving an F3 car at Hockenheim for both Hughes, who has a total of five days' experience in F3 machinery (four of them last winter), and Norris, who along with fellow Carlin driver Dan Ticktum will have to start the races from the pitlane because of their extensive F3 rookie-test programmes.

Hughes's lap was subsequently bettered at the last gasp by David Beckmann, only for the Mucke Motorsport driver to have his effort disallowed due to exceeding track limits.

"The lap wasn't mistake-free, so even if it [Beckmann's time] was allowed I'm confident I could beat it," said Hughes.

"The car feels mega. In FP1 I was very quick early on and what we learnt there we put to good use - it's looking good."

Norris had just fitted a set of new tyres when the red flag - due to the stricken Hitech GP car of George Russell - spoiled his chances of improving. 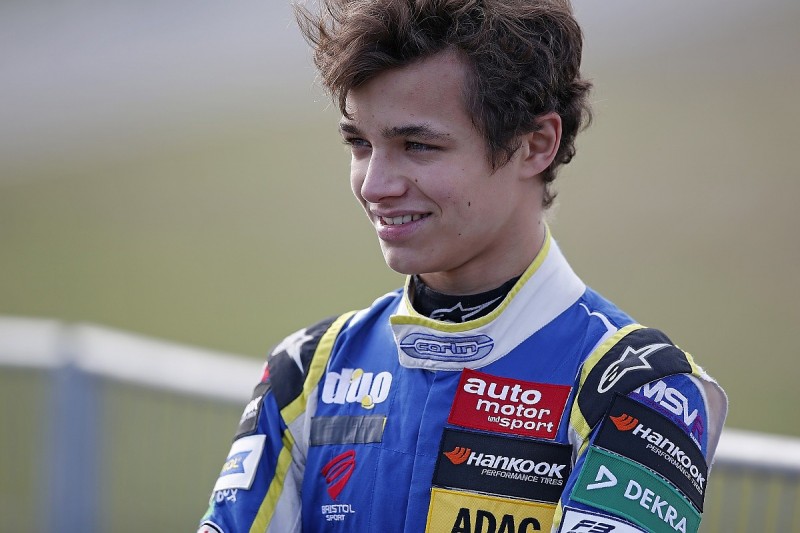 "The first half of the session I was just getting used to it," said Norris.

"I'm pretty pleased with how it went, although you never know who's been running conservatively or not until qualifying."

Joel Eriksson (Motopark) and Maximilian Gunther (Prema) were fourth and fifth in the second session, with Norris next.

Norris's first-session performance put him 0.225s clear of Beckmann, who again leapt up the order on the final lap but in this case was allowed to keep the time, with Van Amersfoort Racing's Callum Ilott and Hughes next.

Ticktum, Carlin's other British category debutant, finished up just outside the top 10 at his first race weekend since the end of his 12-month suspension from racing.