Pedro Piquet, son of three-time Formula 1 champion Nelson, topped the first session of the new FIA Formula 3 Championship in Barcelona as the new car made a strong debut

Trident Racing driver Piquet jumped to the top of the leaderboard in the last three minutes with a 1m33.255s.

It means he becomes the first session-topper of the championship, which has been formed this year by the merging of the GP3 Series and European Formula 3.

Piquet raced in GP3 last year with Trident, while the next two drivers in the order jump over from European Formula 3.

Red Bull Junior Juri Vips steered his Hitech Grand Prix-run car to second, 0.09s behind Piquet, as he also made the most of improving track conditions to slide up the order in the closing minutes.

Ferrari Acdemy driver Robert Shwartzman had topped most of the session, initially clearing the field by half a second in the middle of the session.

The Prema driver made sure two of the emigrating Euro F3 teams - Hitech and Prema - were in the top three with ex-GP3 team Trident on top.

Finn Niko Kari was concerned that Barcelona isn't his best track, but jumped up the order late on to give Trident two cars in the top four, with last year's GP3 practice pacesetter Jake Hughes in fifth. 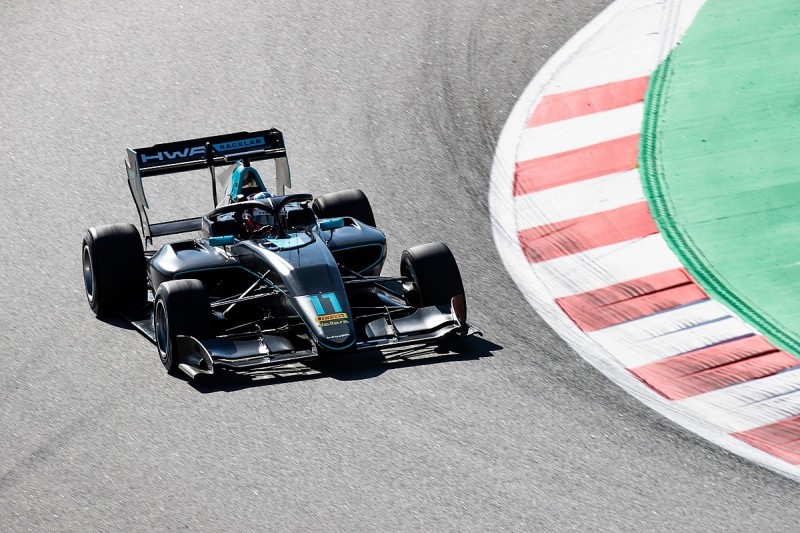 Hughes drives for HWA, making its first appearance with its own team proper in junior single-seaters.

He spent the first half of the session at the bottom of the order with a small technical issue, but jumped to within two tenths of Shwartzman while most cars were debriefing in the pits.

Simo Laaksonen - who had a fine end to the GP3 season last year - earned eighth for MP Motorsport, ahead of the top ART Grand Prix car of David Beckmann.

Beckmann was one of two title favourites touted by most in the paddock, but his session was hampered by hitting Fabio Scherer at Turn 12 which damaged Beckmann's front wing.

He was the top ART car, the team having won all but one of the GP3 Series' team titles including last year's, making it a pre-season tip for honours this year.

Renault junior Yifei Ye rounded out the top 10 for Hitech, with its third car a noticeable absentee from the top of the order.

Leonardo Pulcini sat on pole in the GP3 Series at the track last year and also set the fastest pre-season testing lap at the same circuit this year, but could only manage 24th in the order as his early benchmark was toppled by late bloomers.

Most drivers executed some variation of push laps on one set of the hard tyre and then longer runs on a second set. The hard tyre is the only one of the new-for-2019 F3 Pirelli tyres being used this weekend in Spain.

Jenzer's Andreas Estner completed the most number of laps with 21, while Sebastian Fernandez completed the lowest with seven as he spent the early part of the session sat on the Campos Racing pitwall.