Formula E driver Antonio Felix da Costa says he has "no regrets" about the Santiago E-Prix radio messages in which he blasted his DS Techeetah squad and team-mate Jean-Eric Vergne.

Da Costa narrowly missed out on victory in the Chilean capital, losing the lead to victor Maximilian Guenther with three corners to run after a critical battery-temperature issue.

He had been delayed earlier in the race behind reigning champion Vergne, who was forced to pit and then retire after a fairing had dropped on to his front-left wheel.

When Vergne tried to knock off the offending article by tapping a wall, he was close to colliding with his team-mate.

Da Costa said over team radio: "Man, JEV, this is not how a factory driver works. You understand?

"His car is smoking like fuck. He's not moving out of the way."

After his team replied with "we are on it, we are on it" as they attempted to resolve the situation, da Costa added: "No you're not!

"He's closing the fucking door. Fucking idiot... We can win this fucking race."

But da Costa replied with: "Yeah, I cannot say the same from your side unfortunately, this time.

"We should have won this easy. What are we doing?" 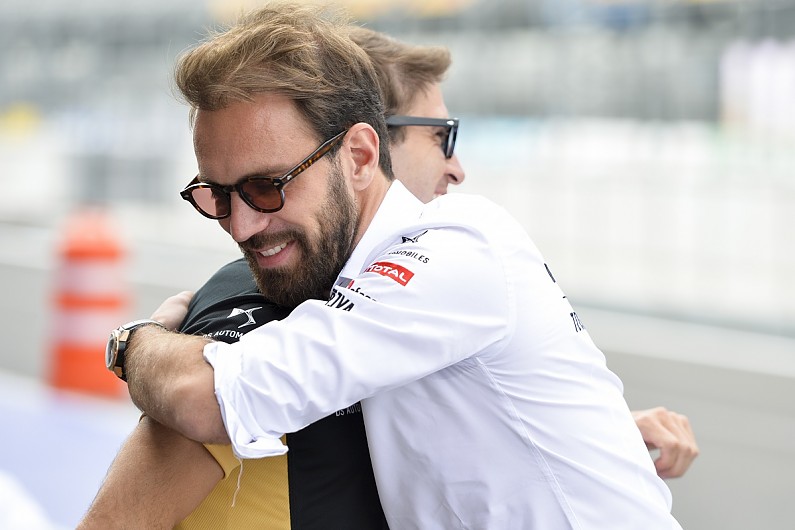 Vergne and da Costa (background) are close friends off track and went skiing in France together after the race.

Speaking ahead of the Mexico City E-Prix, da Costa said no ill feelings were carried over by the two.

"There's no stress, no drama," he told Autosport.

"We're all lions trying to win. It's our passion and that's why we push so hard.

"There was just a few communications backwards and forwards but it's a new team for me, I'm new here, it's a new crew.

"Every day [you are] just getting more acquainted with everything and it's all good."

When asked about his relationship with Vergne going forward, da Costa told Autosport: "It's all good.

"As long as you have respect, then it's never going to be a problem.

"We had that misunderstanding at the Santiago race, but two days later we were skiing for a weekend in France. No stress."

Da Costa's radio messages were made publicly available in a video uploaded to the Formula E YouTube channel.

But the two-time Macau Grand Prix winner reckoned there was no need to make the conversations between drivers and race engineers a private matter.

"It's just a game," he told Autosport.

"I knew that it might be coming out and it did come out. No regrets, to be honest.

"It was nothing against JEV or whatever.

"But you know when you feel like you can win the race and you're being held up.

"I don't think one driver in this whole pit lane would be happy about that."